Daring! Sydney Leroux back in training at 6 months pregnant

US Women’s star Sydney Leroux has been praised across social media after joining pre-season training while six months pregnant.

The 28-year-old, who is married to former Norwich City youngster Dom Dwyer and already has one child, son Cassius, plays for Orlando Pride in the NWSL.

And when Orlando returned to pre-season training this week, she turned up despite being pregnant.

‘I didn’t think I’d be starting off preseason 5.5 months pregnant but here we are,’ she posted on Instagram.

Some fans said they were ‘proud’ of Leroux, while another referred to her as a ‘legend’.

A person left a comment saying: ‘This is awesome on so many levels’.

Someone suggested that she was an ‘inspiration to ALL lady ballers’; while another added she was a ‘legend’.

Asked about the medical science behind training, she said: ‘I just do non-contact stuff. Ball work and touches. I don’t put myself in situations where the ball can ricochet or I can get hit. 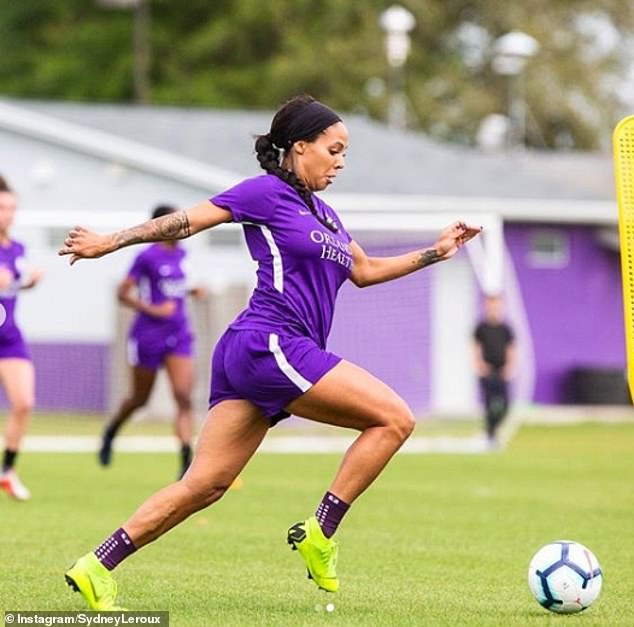 ‘No high intensity running and I listen to my OB (who knows more than people on twitter telling me what I shouldn’t be doing with MY body).’

Leroux’s second child is expected on July 4. She fell pregnant a year prior to that date before a miscarriage.

That led to her missing a month of last season with an illness, which she then confirmed had been to do with her pregnancy.

‘I was naive to the pain of what this felt like. There was a moment when I was on bed rest where I wondered if the emotional pain could kill me,’ she said in October 2018.

‘There was a sense of shame and embarrassment that came with losing a baby. Except the statistic of losing a baby is 1 in 4. This means there are so many of us going about our day trying to bury our grief and pain.’