David Beckham tinkering with the idea of space travel

David Beckham is contemplating traveling to space. The former Manchester United and Real Madrid ace appears to be thinking of some form of adventure.

The Sun reports the football ace, 43, has been ‘mulling it over for some time’ and that it’s looking like it could happen now that ‘space travel is becoming a more realistic prospect’.

If that wasn’t enough, the father-of-four apparently even wants to ‘kick a ball’ while he’s up in the ‘celestial heavens’.

A source is said to have told the newspaper: ‘It’s something that David has talked about for quite a while. It has been mooted in the past but now space travel is becoming a more realistic prospect it could be a reality.’

Adding rocket fuel to the fire, David’s children Brooklyn, 19, Romeo, 16, Cruz, 13 and Harper, seven, are all said to be beside themselves over the prospect, and ‘have been talking about it and think it would be pretty cool’.

But it’s not all plain intergalactic sailing for the husband of Spice Girl-turned-fashion designer Victoria; the source goes on to admit David has ‘admitted privately he’s very nervous’ about the prospect of being blasted into the ether.

The reports are also said to be backed up by claims that companies such as Virgin Galactic – who will potentially be ready to send tourists to an altitude of 360,890ft ‘in the very near future’ [according to boss Richard Branson] – have their eye on David for sponsorship deals. 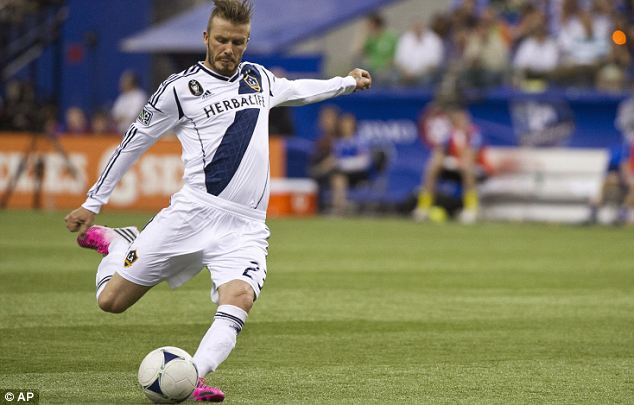 Branson has previously said his space tourism firm is on the cusp of being able to carry passengers beyond orbit ‘not too long after’ this year – with him on the first flight. And it appears that he wants Beckham by his side.

The news comes on the same day that former Countdown math whiz Carol Vorderman declared she would like to be the first woman to have sex in space.

We have blast off? But it’s not all plain intergalactic sailing for the husband of Spice Girl-turned-fashion designer

In what is shaping up to clearly be a day of intergalactic firsts, the TV star, 57, who used to date an astronaut and is a keen aerophile herself, admitted her raunchy plans on Loose Women on Thursday.

She confessed: ‘I would like to go to space and do naughty things in space.’

As Nadia Sawalha interjected: ‘Basically she wants to be the first person to have sex in space!’ Carol laughed: ‘Not by myself!’With the Beckham/Branson/Vorderman trio set for a space continuum, surely the heavens can’t wait.

Manu Garba: Golden Eaglets will be ready for CAN 2019