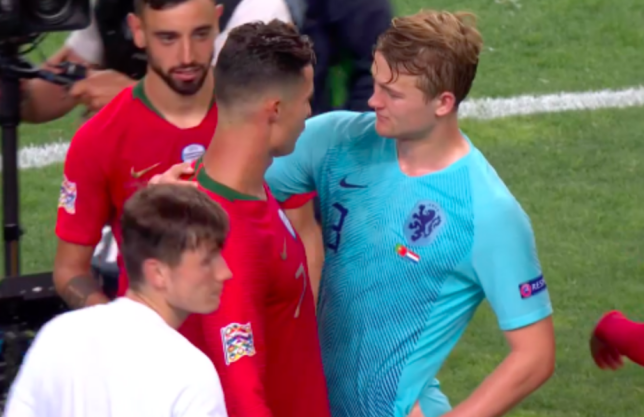 Matthijs de Ligt reveals Cristiano Ronaldo “asked me to come to Juventus” after the Nations League Final. “I was a little shocked.”

Portugal beat the Netherlands 1-0 to win the first ever edition of the tournament, with a goal from Goncalo Guedes.

At the final whistle, Ronaldo and De Ligt were seen laughing, so the Ajax defender was asked what they’d been talking about.

“I was a little shocked by that question, that’s why I laughed. I didn’t understand him at first.”

read also: Ronaldo: I have no plan to retire soon

There are reports all over Europe this weekend that Manchester City’s latest offer was rejected, meaning the race for his signature is between Barcelona, Paris Saint-Germain and Juve.

De Ligt also spoke to Univision this evening and outlined his thought process.

“Now I will go on vacation, I’ll think carefully about what is best for me and then I’ll decide. For a young player like me, it’s important to go to a club where I can play consistently. That’s the main issue.”

Joshua to retire if he loses to Ruiz Jr. again, says Tyson