England football star, Dele Alli, was beaten and robbed by knife-wielding raiders who burst into his home early yesterday. 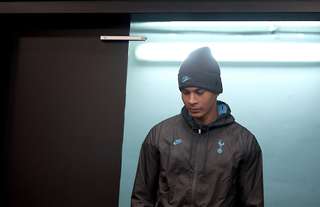 The 24-year-old Spurs midfielder was punched in the mouth by the masked bandits and ordered to hand over valuables.

At the time of the robbery, Dele is said to have been playing pool with six pals and girlfriend Ruby Mae.

After attacking Dele, the raiders took two expensive watches from the star and jewellery belonging to model girlfriend Ruby, also 24.

One of Dele’s friends was also hurt after putting up a fight during the robbery in Hadley Wood, Herts.

The two blaggers forced their way into the £2 million detached house at 12.30am.

A source said: ‘’Dele was still up and playing pool downstairs with six friends.

“It all kicked off and Dele was hit in the mouth by one of the robbers.

“One of his friends tried to have a go back and was also beaten.

It all kicked off and Dele was hit in the mouth by one of the robbers.

“After stealing two expensive watches from Dele, one of the robbers went upstairs and jewellery.

“It was a terrifying experience for everyone present and Dele has been left extremely shaken up.”

It is understood the valuable watches taken from Dele were a Richard Mille and Audemar Piguet.

Police believe the £150,000-a-week player could have been deliberately targeted by the robbers.

“Two males gained entry to the property and stole items of jewellery, including watches, before fleeing.

“Two male occupants at the property suffered minor facial injuries after being assaulted. They did not require hospital treatment.

“There have been no arrests. Enquiries into the circumstances continue.”

They terrified his wife and young family while the Belgian defender was playing away in a Champions League fixture in Germany with his club.

Dele’s and Ruby have had an on-off relationship but are said to have isolating in lockdown together.

The source said: “Dele had six friends with him at the time of the robbery.

“They were playing pool and drinking when it went off.”