Barcelona boss Ronald Koeman has explained why Ousmane Dembele was undertaking extra training sessions with the club over the international break.

The Dutchman explained that Dembele needed the extra fitness following a year of injury struggles and he noted how the forward had impressed him during the sessions.

Earlier this week, a report from Esport 3 as cited by Diario Sport, which claims the Frenchman’s training sessions were not voluntary, as had been originally reported by Sport, and he in fact had not been given any time off by boss Ronald Koeman.

Dembele’s teammates been given four days off by the club over the international break in order to recuperate and rest following the opening of the season.

However, Dembele was said to have been instructed to come to the club’s facilities to build up his fitness which had been lacking from his long-term injury previously.

“Dembélé has a lot of quality, and little by little he will be physically well,” Koeman told reporters on Friday, as per Marca.

“Those who have not played many games have trained. And he has been one of them. I am very happy with his training.”

Dembele returned to training on Tuesday last week after missing out Monday’s session during the transfer deadline day.

Now the Frenchman is staying at the Camp Nou and is intent on changing the hearts and minds of those at the clubs.

Dembele has not featured for Barcelona’s first-team since November – and did not play at all under former boss Quique Setien – due to long-term injuries while his fitness has blighted his time at the Camp Nou since his 2017 switch from Dortmund. 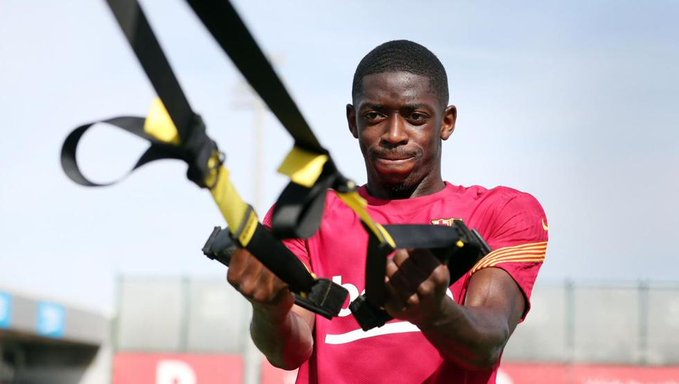 The France international – who has been plagued by injuries since moving to the Camp Nou in the summer of 2017 – pulled up in the 25th minute of the clash against his former club Dortmund in late November and has not featured since.

In three years he has suffered seven muscle injuries at the Camp Nou.

Dembele has made 74 Barcelona first-team appearances, scoring 19 goals and 17 assists, and has been identified by United as an alternative to Jadon Sancho of Borussia Dortmund.