Nigeria’s sprint duo of Blessing Okagbare and Divine Oduduru will not be participating at the International Association of Athletics Federations (IAAF) Lausanne Diamond League tonight due to their inability to secure Schengen visas to Switzerland. 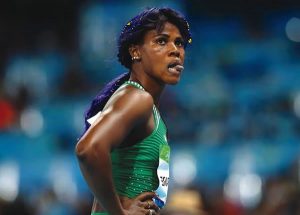 Oduduru was expected to to make his Diamond league debut in the men’s 200m after posting one of the fastest times this year while Okagbare in the women’s 100m.
Okagbare, who has recently been in top form after years blighted with injuries, won the Women’s 200m race at the Prefontaine Classic held in Standford, USA last weekend ahead of the reigning Olympic 100m and 200m gold medalist, Elaine Thompson and won her last Diamond League 100m race in Morocco last month.

Read Also: Blessing Okagbare Wins 200m Race At Prefontaine Classics In The US

Battle of Alexandria: Eagles are not ready to go home–Ndidi