Fortuna Dusseldorf II goalkeeper, Maduka Okoye, has expressed his eagerness for the first-team action in a top-flight league and hopes to secure a loan move to realise his desire. 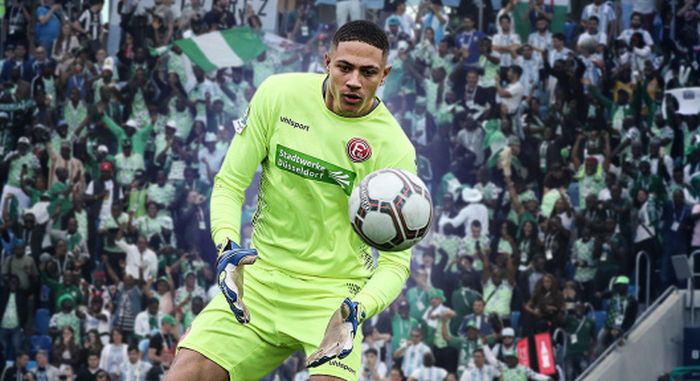 The Bayer Leverkusen academy graduate has struggled for playing time since teaming up with the Regionalliga West side in 2017.

Okoye has been restricted to 22 league games since his arrival at Merkur Spiel-Arena and this season he has only made 14 appearances.

The 20-year-old has expressed his displeasure at his insufficient game time and hopes to secure a temporary move away from the Flingeraner to gain more experience.

“Fortuna (Dusseldorf) is my number one spot but I want to play. I have to get experience in the first team,” Okoye told Super Eagles media team in an Instagram chat.

“I have discussed with Fortuna maybe I will go to the Dutch league on loan to play so that I can get premier league experience in the Netherlands.”

Okoye, who has one cap for the Super Eagles is delighted with his progress having started as a forward before switching to a goalkeeping role.

“I started football at a young age but then I was a forward. It shocks me that I now excel and I am making gradual progress in the goalkeeping role,” he continued.

read also:Rohr reveals: I was forced to bench Okoye

“It is an interesting role and I have learnt a lot to even have a chance with the Super Eagles.”

Okoye was part of the Super Eagles squad scheduled to take on Sierra Leone in March in an Africa Cup of Nations qualifying game before it was suspended due to the outbreak of coronavirus.

Lukaku among stars to wish ex-coach swift recovery from surgery