Undefeated Apochi will fight once-beaten Earl Newman in a eight-round cruiser-weight contest and the 31 year-old Ughelli-born boxer is confident Newman would not last more than four rounds in the ring with him.
“Fans should expect a Knock out in less than 3 or 4 rounds, because I looked Earl Newman up and he is pretty decent. So he might be able to survive the first 2 rounds but the ‘Nigerian Pitbull’ play rough”.
An accomplished amateur in Nigeria where he captained the boxing team to a bronze-winning performance at the 2014 Commonwealth Games, Apochi has knocked-out all his opponents in his seven fights since turning professional in 2017.

Earl Newman, 27, is looking to rebound from a decision loss to Lionell Thompson in November 2017. He has won 10 out 12 fights since he began professional boxing in 2014 and has lost and drawn once.
The Brooklyn, New York native was unbeaten in his first 10 pro fights.
Also fighting on the same under-card will be Wale ‘Lucky Boy’ Omotoso who will fight undefeated Chordale Booker (14-0, 7 KOs) in a 10-round Super Welterweight contest.
Omotoso last fought in December 2017 when he beat Freddy Hernandez and has fought 30 times, winning 21 out of 27 wins via knockouts and has lost three times. 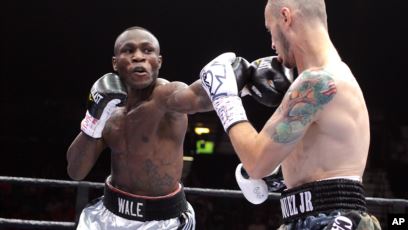 “I am really happy he took the fight because most people say I am too dangerous and too tough.
“I will give it all I got. When I go to the ring I put all my effort and training into the fight. That is the way this sport is.
“I know he is going to come in with all he has got, but the toughest man will win.”
Born in Lagos but now training in Los Angeles, Omotoso learned to fight in the streets before honing his skills in the boxing gym. He calls himself “Lucky Boy” because he feels fortunate to have made it off the streets alive and become a successful professional boxer.
BOXINGEfetobor ApochiWale Omotoso