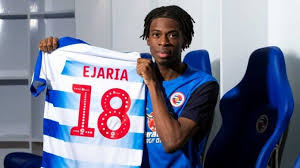 Ejaria was born to Nigerian parents in London and went on to develop his game in the Arsenal academy for nine years before joining Liverpool as a 16-year-old.

The midfielder previously trained with the Nigeria U17 team in 2013 before making his debut appearance for the England U20 side in October 2016.

“He has dumped England for Nigeria but the paperwork is still ongoing with Fifa,” a top NFF official told Goal.

The 22-year-old is believed to have submitted relevant paperwork to Fifa to confirm the change of his nationality, and he plans to renew his Nigerian passport.

He left Liverpool in January 2019 to join Championship side Reading on an initial six-month loan before extending his stay for the entire 2019-20 campaign with the option of a permanent move.

The midfielder played prominently for Liverpool’s U23 side before his loan move. He managed just two appearances for the Reds in the Premier League and also played three games each in the League Cup and FA Cup in the 2016-17 season.

Ejaria was a regular fixture at Reading this season, making 32 appearances with three goals and four assists to his name in the Championship.