England’s Mason Mount labelled the hostile Hungarian crowd’s behaviour in their World Cup qualifier a “disgrace” but said they used it as fuel to score more goals and silence the home support in Thursday’s 4-0 win in Budapest.

British broadcasters reported monkey chants being aimed at England’s Black players while plastic cups rained down on the players when they celebrated goals near the corner flag.

“When the whole stadium is against us, we grow. We spoke about it and we knew it would be a hostile environment, we revel in those opportunities. We want to show what we can do on the ball and make the stadium silent,” Mount said.

“As soon as we scored… you could tell within the atmosphere that something was going to be thrown or something would happen and luckily no one got hurt. We obviously have had it in the past and it’s a disgrace how it keeps on happening.

“When these things happen, consequences need to take place. The FA will be speaking to Fifa about it and hopefully it keeps getting put to them and they hand out bans. It needs to stop and we need to get this out of football.”

World soccer governing body Fifa said it had opened disciplinary proceedings into the incidents at the match and reiterated an earlier statement reaffirming its zero tolerance stance against racism. 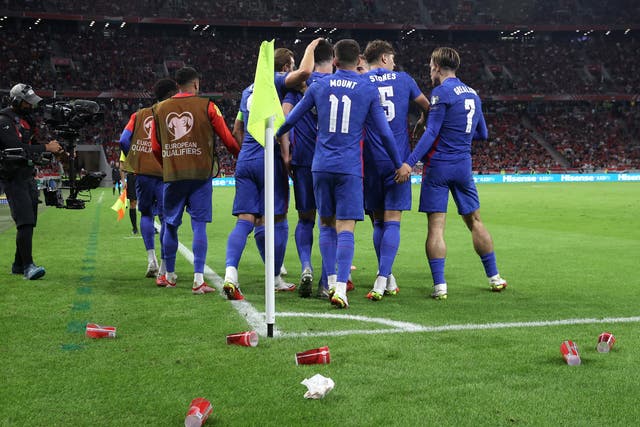 England host Andorra at Wembley Stadium on Sunday before taking on Poland in Warsaw on September 8 and Mount believes the result against Hungary shows they are growing in confidence after losing the European Championship final to Italy in July.

“I don’t think we have ever been scared of anything,” Mount added. “We know what we have got in the team and to come off the Euros final and what happened in the summer.

“This was a massive win and especially in the group as it has put us more ahead. We won’t take a breather. We have two more games this camp and we are ready to keep pushing.”