Thomas Tuchel’s side were dominant for much of the match and took a first-half lead through Kalidou Koulibaly. They rarely looked troubled but Pierre-Emile Hojbjerg got Spurs level with 20 minutes remaining, sparking a clash between the two benches.

Parity lasted just nine minutes, as Tottenham’s woeful Stamford Bridge record looked set to continue. Spurs have won away at Chelsea just once in the Premier League era, and Reece James’ strike put the Blues back in front again.

But Kane flicked a header into the far corner deep into stoppage-time, with the help of a slight deflection from James, and more angry scenes followed on the touchline at full-time as both managers were sent-off.
Enfield: 100 firefighters extinguish grass fire at college

There were home debuts for Marc Cucurella, Kalidou Koulibaly and Raheem Sterling at Stamford Bridge, while Antonio Conte named an unchanged side to keep his new signings waiting on the bench.

Heung-min Son had a couple of decent moments on the break early on but that was largely as good as it got for Spurs in what was a dominant first-half display from Chelsea.

A lovely move from the Blues forced Hugo Lloris into a superb save to turn Kai Havertz’s low strike behind, and from the resulting corner Chelsea took a deserved lead. Koulibaly had the freedom of west London as Cucurella swung the ball in and he took full advantage to volley home a sensational opener.

Ryan Sessegnon had the chance to equalise almost immediately, but was denied by Edouard Mendy after being played clean through. The offside flag stayed down, but VAR may well have intervened had the the ball found the back of the net.

The second goal should really have come for Chelsea as Mason Mount worked space on the edge of the box but blazed over, while Ruben Loftus-Cheek was unable to make the most of a number of bright moments at wing-back.

Back into a deserved lead!

Sterling lays it on a plate for Reece, who finishes well! 😎

It was more of the same straight after the break, leading to Conte switching to a back four as he brought on Richarlison for his Tottenham debut.

Sterling had a big chance to double the lead on the hour mark, but blasted over from inside the box, and seconds later Kane wasted an even bigger opportunity. He was played clean through but with only Mendy to beat, he dragged his effort wide of the far post.

The equaliser did come for Spurs, with just over 20 minutes remaining. Jorginho was caught on the ball on the edge of his own box, it was played back to Hojbjerg and he drilled it low into the far corner. Chelsea had a strong case for a free-kick earlier in the move, as Rodrigo Bentancur slid in on Havertz, but play was waved on. Conte’s exuberant celebrations took him into Tuchel’s technical area, where the German did not provide a warm welcome. The two managers squared up to each other and were duly booked. 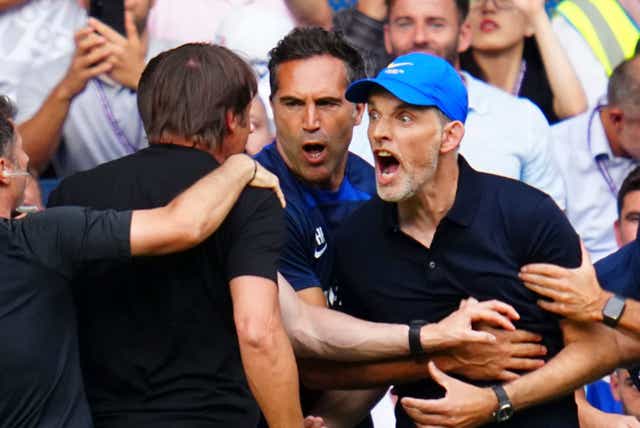 Chelsea should really have restored their lead five minutes later, when James whipped a wonderful low cross into the box, but Havertz somehow missed from close range.

Tottenham had one let-off but not a second. The ball came to Sterling in a huge amount of space, he slid it wide to James who was completely free and the wing-back drilled an effort into the middle of Hugo Lloris’ goal to restore Chelsea’s lead.

The Blues looked to be comfortably seeing the match out, but Tottenham piled on the pressure deep in stoppage-time and Kane flicked home a late corner. The two managers shook hands at full-time, but even that escalated into another clash and the red card was shown to both as the players unsuccessfully tried to restore calm.