Arsenal got their Premier League season off to a winning start as they battled to a hard-fought 2-0 victory over Crystal Palace at Selhurst Park.

Confidence was high for the Gunners going into the opening night of the campaign, with a squad buoyed by a number of strong signings and an impressive run of pre-season victories.

We missed you, @PremierLeague 😘 pic.twitter.com/JvVtOLNbPX

There was more of that form on show against Palace, as the visitors took a first-half lead through Gabriel Martinelli’s header and threatened to overrun Patrick Vieira’s side.

The inevitable response came from Palace but Arsenal held firm in front of a typically boisterous crowd in south London, ensuring there was no repeat of last season’s opening day woes against Brentford, and the three points were sealed late on as Marc Guehi headed a dangerous cross from Bukayo Saka into his own net.

Mikel Arteta handed competitive debuts to William Saliba, Oleksandr Zinchenko and Gabriel Jesus, while Cheick Doucoure was given the nod in midfield for Palace.

The Gunners made a superb start at Selhurst Park, with Jesus in particular looking just as sharp as he has been in pre-season. He burst into the box in the opening minutes, poked a shot at goal and the ball fell for Martinelli, who somehow fired wide from six yards out.

The Brazilian made up for that though, scoring the first Premier League goal of the season with 20 minutes on the clock. A deep corner was swung in to the back post, Zinchenko headed it back across goal and Martinelli was there to provide the finishing touch. 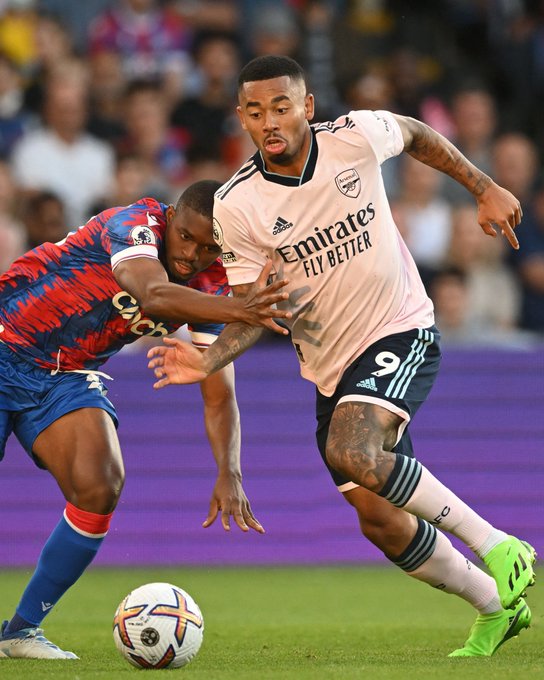 Palace grew into the match, helped somewhat by a nervy showing from Aaron Ramsdale who was twice nearly made to pay for carelessness in possesion. Ramsdale though, who now has the number one shirt to reflect his status at the club, produced a brilliant save to prevent an Odsonne Edouard header levelling the match up.

It was more of the same straight after the break, as Palace continued to put pressure on the Arsenal defence. Eberechi Eze had a massive chance to equalise, but his effort was far too close to Ramsdale and the Arsenal goalkeeper came to his side’s rescue again.

At the other end of the pitch Martin Odegaard proved too keen to provide for Martinelli. Brilliant work from Jesus saw him shrug off Marc Guehi, pull the back perfectly for his captain but Odegaard opted not to shoot when completely free in the box, and his attempt at a cute pass to Martinelli was an unsuccessful one.

COME ON YOU GUNNERS! ❤️

The Gunners found themselves pinned back for much of the final 25 minutes, as Palace went in search of an equaliser. Wilfried Zaha was a constant threat down the left, particular when Ben White was booked for one foul too many on the winger.

But those nerves were eased and victory was wrapped up with five minutes remaining. Saka drove into the box, fired a cross into the six-yard box and the ball flew off Guehi’s head and into the far corner, kicking off the chants of ‘We are top of the league’ from the Arsenal fans.