By Our Reporter Last updated Aug 4, 2019 0
Ese Brume at the 2018 Commonwealth Games
Nigeria’s Ese Brume set a new Personal Best time to win the 100m race at the Buyukler Sampiyonasi meet in Turkey. 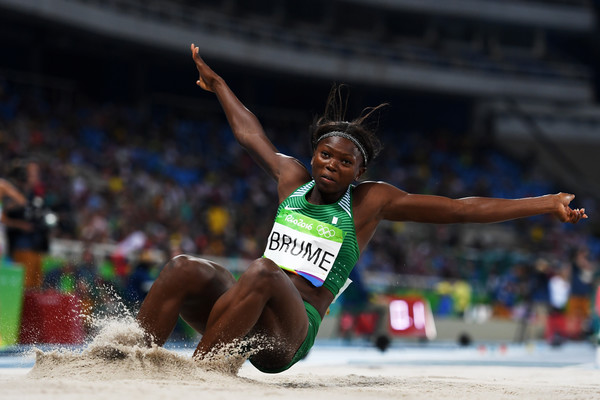 Brume previously ran a time of 11.50s in the Semifinals before running a time of 11.41s ahead of Burcu Erdemir who ran 11.71s and Elif Polat in 11.81s.
Brume also jumped a massive 7.05m on Sunday to win the women’s Long Jump finals, also breaking her PB in the event.
She moves to 2nd on the African all-time list behind Chioma Ajunwa’s African Record of 7.12m. Blessing Okagbare is third on the list with 6.96m.
She had earlier set a new PB in the Long Jump when she jumped 6.96m at the 5th International Sprint-Relay Cup in Erzurum Kadin.
Meanwhile, Chukwuebuka Enekwechi threw an impressive 21.26m throw at the Kamila Skolimowska Memorial in Centniewo, Poland to come in second in the  men’s Shot Put.
Enekwechi, who is ranked 14th in the world, was beaten by Michal Haratyk at an equal Polish Record throw of 22.32m while Konrad Bukowiecki came in third at 20.58m.

Read Also:Ese Brume qualifies for World Championships, 2020 Olympic Games
Jerry Jakpa shook off the disappointment of being left out of Nigeria’s African Games team  after finishing second at the National Trials, equaling his 200m PB of 20.59s (+0.6) to win at the Citius meet in Berne, Switzerland.