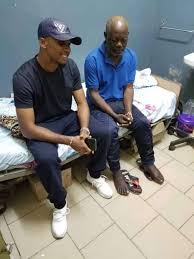 Former Cameroon captain Samuel Eto’o has come to the aid of another Indomitable Lions ex-captain Norbert Owona, who recently featured in a television documentary showing that he was homeless and suffering from an inguinal hernia.
Owona who represented his country in two Africa Cup of Nations and scored against Nigeria in Lagos during the 1970 FIFA World Cup qualification campaign fell sick and has been living in pitiable conditions after losing his family in a tragic accident, according to reports.
Etoo decided to help him back to his feet by donating a house and house after the former captain accused the Cameroonian government of neglect.
In a tweet by sports journalist Collins Okinyo, Owona was said to have pleaded to the government of Cameroon for help but nothing happened. Fortunately, Eto’o visited him at the hospital and donated 500,000 CFA and promised him a new house.
Okinyo tweeted: “Great heart Samuel Eto’o. Norbert Owona, former Cameroon captain lost everything he had in life, lost family in accident. Asked government of Cameroon for help to no avail, Eto’o paid him a visit gave him 500,000 FCFA and promised him a brand new house.”

Doctrine of necessity for Nigerian Football