Samuel Eto’o has spoken to former team-mate Xavi about returning to Barcelona as the manager – and believes he should do so while Lionel Messi is still playing. 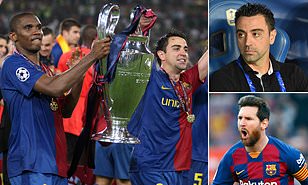 Eto’o played with club legend Xavi – who is currently manager of Qatari side Al Sadd – for five years at the Camp Nou, from 2004-2009.

The pair also played with current club captain Messi, 32, and while Xavi has been linked with the hot-seat at Barca already following the departure of Ernesto Valverde in January, the Spaniard opted against taking the reigns right now, with Quique Setien instead taking charge.

‘You have to go back to Barcelona while Leo [Messi] is still there, because with him it would all be easier,’ Eto’o told Spanish outlet Marca.

‘Xavi is a natural leader who knows how to manage emotions and, what’s more, he’s a very good guy.

‘He’s up front, he understands football and I insisted to him: “Machine, you have to go back and try to do something with Messi still there!”‘

The hierarchy at Barcelona reportedly travelled to Doha for talks with Xavi when a new manager was needed, but with reservations about taking over midway through the season, the 40-year-old stayed put.

That is not to rule out what seems a likely and obvious reunion further down the line, and presidential elections next year could trigger another attempt at luring the former midfielder to Barcelona.

Meanwhile, Eto’o, 39, himself admits he is enjoying retirement after calling it a day last year – but is keen to return as a coach in the future.

‘My dream is to return, but right now I just finished my career and I’m enjoying a long holiday with my family, ready to prepare my future life,’ Eto’o added.

Barca go into the return of La Liga this weekend with a two-point cushion from Real Madrid at the top of table, and they open up at Mallorca on Saturday.

‘If Barcelona win, everything is good for me,’ former Mallorca and Barca striker Eto’o said.

‘I know there is a game soon between Mallorca and Barcelona, the two teams of my heart, I won’t be able to be there, but I’ll watch on television to support them both.’

I had my best time in Cologne, says  Ujah