Liverpool are still searching for their first win of the season after local rivals Everton won the first Women’s Super League match 1-0  held at Anfield, in front of a crowd of 23,500. 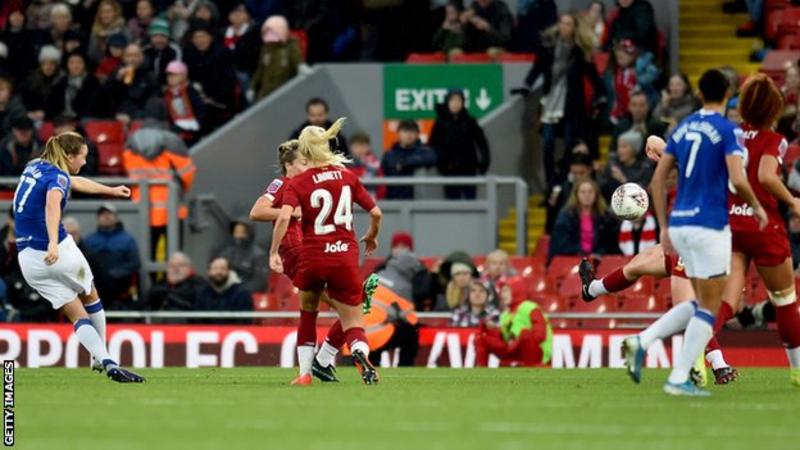 Lucy Graham’s long-range strike rolled into the bottom corner on the stroke of half-time after Liverpool keeper Anke Preuss had fumbled the Everton skipper’s shot.

The hosts, who sit bottom of the table after registering just one point from their opening six WSL games, were the better side territorially with 11 shots to Everton’s six.

Victory for Everton takes them 11 points above Liverpool and they sit in fourth place in the table.

There was huge anticipation ahead of kick-off – a number of fans attending the 54,074-capacity stadium for the first time, many sitting in the famous Kop stand.

The home fans sang ‘You’ll Never Walk Alone’ as the players walked out on to the pitch but you could hear the Everton contingent chanting throughout.

Twenty-year-old Charles, a lifelong Liverpool fan who regularly attends matches at Anfield to watch Jurgen Klopp’s Reds, was the orchestrator of a number of chances in the first half.

Kirsty Linnett was the most frequent beneficiary and thought she had broken the deadlock, only to be denied by a sublime save at the right-hand post by keeper Korpela.

Liverpool’s dominance ultimately came to nothing and they were punished for it when Preuss’ costly mistake gifted Everton a goal seconds before the half-time whistle blew.

The second half continued in much the same manner as Charles’ shot was blocked in the six-yard area, Danielle Turner sliding in at the crucial moment.

Everton, though, always posed a threat on the break and Simone Magill could have doubled their lead late on but her first-time volley bounced inches wide.

The visiting fans behind the goal roared in celebration moments later when the full-time whistle went and the players huddled together before thanking the supporters.

While Liverpool’s winless run extends to six games in the league, Everton boss Willie Kirk has got his team firing with four wins, including two on the road.

Read Also:Everton dedicate first away win of the season to Gomes

But the Reds, who had an average attendance of 536 last season at their usual ground – Tranmere Rovers’ Prenton Park – will be pleased with the turnout on a weekend where women’s football has been celebrated at several men’s grounds across the UK.