By Our Reporter On Jan 22, 2020 0
De Laurentiis opted to sack Ancelotti after a poor start to the season but regrets the move

Everton striker Moise Kean admits his first goal for the club has given him the boost he needs to start scoring more regularly.

The 19-year-old recorded his maiden Everton goal on his 22nd appearance since a £27.5million move from Juventus in a 71-minute display but it was not enough for victory as Newcastle scored twice in added time to snatch a 2-2 draw. 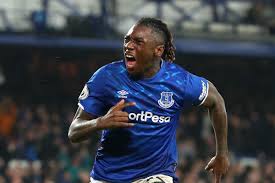 However, there was considerable promise in his performance, one which Goodison Park had been waiting for since the summer.

“It feels good, it is a big motivation to do more work and help the team. I hope (it is the first of many),” Kean told evertontv.

“I showed to the coach in training I am ready and if he chooses to put me on the pitch, I do my best. I am very happy.

“It is good motivation to start to do very well, to play very well for the team.”

Kean believes his partnership up front with Dominic Calvert-Lewin, who took his league tally to 10 goals with the second against the Magpies, benefits him and the team.

“Me and Dom play very well together. It is good for me and for the team that we play two strikers but we need to keep going to achieve more good results,” he added.

Manager Carlo Ancelotti wants striker Kean to improve technically and tactically but believes the teenager is heading in the right direction.

“It was good for him, for his confidence, for a striker to score goal it was important,” said the Italian.

“He played really well, worked hard, pressed forwards, what I asked, he did. It was important for the team.

“This goal can give him more confidence in what he is doing, he is doing well.

The draw made it just one league defeat in six league matches for Ancelotti and, despite the devastating disappointment of allowing a win to slip through their fingers, the manager refused to be too downbeat.