The Spaniard has not justified the £71 million Chelsea paid to make him the most expensive goalkeeper in world football and currently has the worst save percentage in Premier League history.

Chelsea showing clips of Pulisic shooting at an empty net, this clubs propaganda is unmatched
pic.twitter.com/KU07l48uMC

And if you look at footage of him in training recently it’s easy to see why. A clip of Christian Pulisic taking shots against the former Athletic Bilbao shotstopper has been shared online and it really wasn’t a great showing from Kepa.

Chelsea showing clips of Pulisic shooting at an empty net, this clubs propaganda is unmatched
pic.twitter.com/KU07l48uMC

He didn’t save a single shot as Pulisic put the ball in the bottom corners every time. It was almost as if Kepa couldn’t even be bothered. 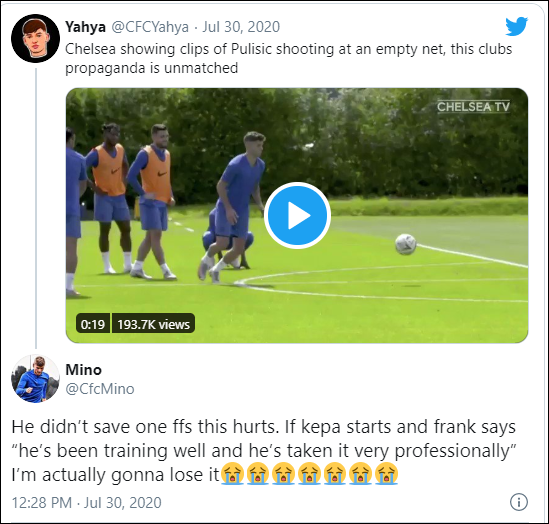 There’s also a seperate clip of Ruben Loftus-Cheek looking away in disgust after Kepa conceded a goal, which continues a worrying trend of Chelsea players not exactly having much confidence in the man between the sticks.

What’s more, a comparison video of Kepa and Willy Caballero diving when facing shots has emerged and with all things considered, everything points towards the Argentine getting the nod for the big game against Arsenal at Wembley later on.

Liverpool, PSG in fight to the finish over Bayern’s Alcantara

Alvaro Morata to fans: Leave my family out of your threats