By Ejiro Femi-Babafemi Last updated Jun 23, 2019 0
Falcons have one leg in the next round of the Olympic Qualifiers

Nigeria’s Super Falcons who crashed out yesterday after losing to Germany in the round of 16 at the FIFA Women’s World Cup have refused to leave their Mecure Hotel in Grenoble untill all their entitlements are paid. 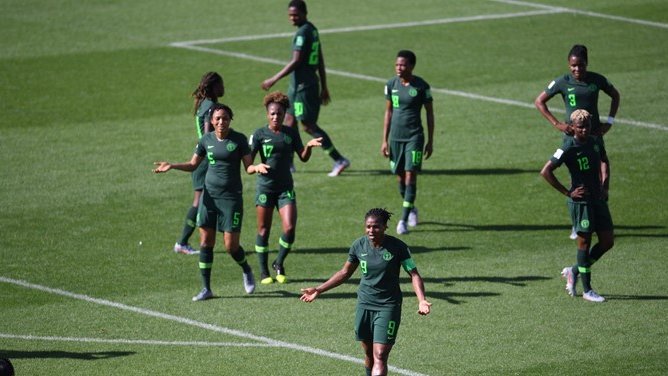 According to a report credited to Colin Udoh,  the girls are being owed bonuses from two games against  against Gambia and Senegal in the 2018 and 2016 Africa Women’s Championship qualifiers.

“They paid us N1million and said that is all. We want them to pay the balance. And they are also owing us five days daily allowance here in France,” one player told me (Colin)

The players also demanded for their share of the World Cup participation fee from FIFA, even though that will not be paid by FIFA till September.

This is the second time in three years the team will be protesting for their  money.

In 2016 the players staged a protest in Abuja after winning the Africa Women’s Championship in Cameroon. It took the intervention of the Federal Government to settle the issue.

Before traveling to France from Austrai, the girls had threatened to boycott the tournament  but were prevailed upon and rescinded their decision.

While in France, the NFF had asked the girls to submit their account details which they did.

Sportinglife.ng decided to send a WhatsApp message to an NFF official in France to confirm the report. The official did not respond after picking the call which was not clear as a result of network issues.

Mikel confesses: Burundi were too hard to crack