Super Eagles and Chinese Super League side Shanghai Shenhua forward Odion Ighalo, may have stirred up a hornet’s nest following his recent claim that he snubbed La liga giants Barcelona preferring a return to China.

Ighalo who finished the 2018 season as the CSL’s second-top scorer with 21 goals said Barcelona were considering  a loan deal for him during the January transfer window which he said he turned down.

He told BBC sport that he had no intention of going to the Nou Camp to warm the Barca bench, describing rejection of the offer as one of the easiest decisions he has made.

‘It was meant to be a six-month loan and strictly as a back-up striker. It was nice to hear that Barcelona were interested and any footballer would be more than happy to take it.

‘With due respect I had just finished as the second top scorer in China with 21 goals, I deserve better and didn’t want to be a short-term player somewhere.

‘We rejected it, it was an easy decision to make and I chose to stay in China by joining Shanghai Shenhua on a longer contract” he had said

The former Watford star that left Vicarage Road in 2017 leaving an impressive record of 36 goals in 90 premier league games may have however failed to impress quiet a number of fans with the comment which some say they are struggling to believe. 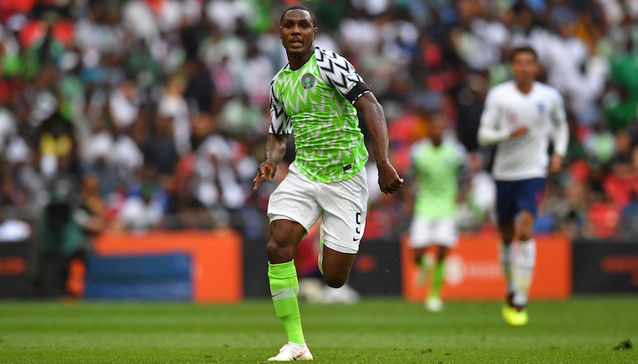 Another who nolito; appears to doubt the reason given by the Nigerian international said “I am sure the money has nothing to do with it” and yet another apparently not in the mood to join issue simply said “stop embarrassing yourself”

But an angrier fellow Meddlerr; who from his submission appears to be a media man said “Still waiting for this guy to do something terrible so I can sell the headline ODIOUS IGHALO to the tabloids”

It was however not a matter of disdain galore as some also hailed Ighalo’s contribution and decision, Bili; said Great decision my broda…keep shining and being a first team player is everything a striker needs while jaychikwado reacting from Ghana said

“For us who are privileged to know Odion a bit closer, I can tell he’s a good guy with good heart. He built school for the poor and a charity home as well. May God continue to bless him”

Ighalo who was impressive in Super Eagles qualification for the Nations cup in Egypt will return to club assignment on Sunday when Shanghai Shenhua face Henan Jianye away.