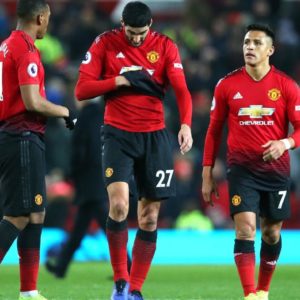 Marouane Fellaini is set to leave Manchester United for an unnamed Chinese club.
Fellaini has been with the Old Trafford side since David Moyes signed him from Everton in 2013.
Fellaini has only managed 31 minutes since Ole Gunnar Solskjaer took caretaker charge last month, although a calf injury has ruled him out of recent matches with the 2-0 FA Cup win over Reading on 5 January his last game for the club.
The Belgian had earlier agreed to a two-year extension to his terms last summer that ties him to the club until 2020.
José Mourinho oversaw Fellaini’s contract extension but the Belgian has struggled for game-time under the Portuguese’s temporary successor.