Fans compare Iheanacho with Zidane ahead of Watford clash

Nigeria international  Kelechi Iheanacho   might be handed  his second game of the season  when Leicester City welcome Watford at the King  Power Stadium in a mid-week English Premier League duel. 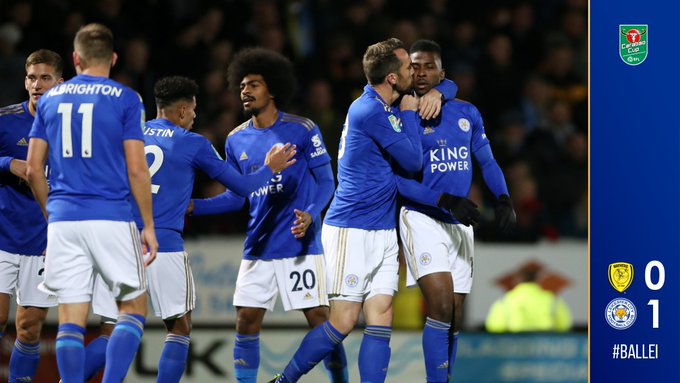 Iheanacho in only his first game of the season on  Sunday, provided  an assist and scored  a last gap winner  in the 2-1 defeat of Everton for their sixth consecutive Premier League victory.

Addressing the  media ahead of Wednesday’s fixture, coach Brendan Rogers has given  the Super  Eagles’ forward a clean bill of health , revealing  that all the players who featured  against Everton  are available  for the game bar Demarai Gray, who sat out Sunday’s victory as a precaution after showing flu symptoms over  the weekend.

“We had everyone in today recovering and a working group,” Rodgers said. “Demarai had flu over the course of the weekend so we’ll see how he is for Wednesday.”

With another seven fixtures to go in December, the Northern Irishman revealed he and his coaching team will evaluate the situation and the necessity to rotate over the festive period.

“Certainly, between now and then, we have to look at what is and isn’t possible,” he continued. “It helps when you’ve got one game a week, the team has rhythm.

“There’s no doubt that over these next few weeks, like every team, we have to consider how we want to play in order to bring energy and intensity in the games.”

“Fair play to Iheanacho;  I know the hardest thing as a forward is getting that consistency to get a run of form and then scoring the goal when you get a chance,” the 54-year-old  who is currently a TV pundit explained.“ He kept his head down; he buried it into the corner. What a finish to the game and it was Iheanacho who sealed a great three points.

“There were a few little flicks in there as well for the goal and you have to say he made a real impact in the game.”

Ex-Foxes star Matt Piper said Iheanacho looked like Zinedine Zidane when he came on against Everton.

Piper told Love Sport Radio that Iheanacho lit up the King Power Stadium when he came on, grabbing the winner with seconds to go.

He said: “Iheanacho, he comes on, he’s been really struggling and he’s even been getting booed by some of his own crowd, the Leicester fans, and it was such a brilliant finish, the way he took it.

“Because it was last second everyone went crazy but the actual technique and how he manufactured the chance for himself was absolutely awesome.

“He’s one of the only guys to fully celebrate twice [after the VAR decision].

“Have we signed Zidane? He came on and his touches suburb.

“He was doing touches, little flicks that only confident players do. He came on and was worth that full £25m that we paid for him.”