Filippo Inzaghi leads Benevento back to Serie A

Former Cagliari striker Marco Sau came off the bench to score the only goal in Benevento’s 1-0 victory over Juve Stabia, a result that sealed the Serie B title.

Benevento, who have won 23 of their 31 league games and lost just once, have a 24-point advantage over Crotone and Cittadella.

Ascoli were the last club to be promoted with seven games remaining, and they did so in 1977-78 when only two points were awarded for a victory.

Benevento were promoted to Serie A for the first time in their history three years ago, but they were relegated after just one campaign having lost their first 14 games. 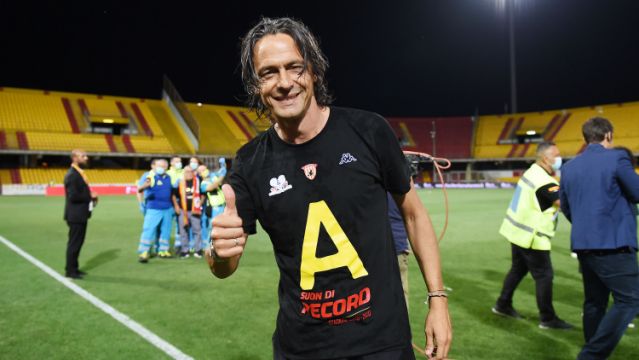 Former AC Milan and Bologna boss Inzaghi took over 12 months ago and will re-join his brother and Lazio coach Simone in Italy’s top flight next term.

“He is better than me in everything,” the Benevento boss said recently. “I can only learn from Simone: he is a modern coach and seeing his Lazio side is a spectacle.”

Benevento look to already be preparing for life in Serie A already as ex-Chelsea and Marseille striker Loic Remy was reported to have arrived for a medical on Monday ahead of signing.

The Sorcerers have scored a league-high 56 goals this season, while they’ve also conceded the fewest, with only 15 goals conceded so far across 31 matches.

Inzaghi is quickly proving his potential as a manager having also previously sealed promotion for Venezia to Serie B in 2017.

Prior to claiming his latest success with Benevento, Inzaghi called for fans to avoid gathering with the coronavirus pandemic still ongoing and instead suggested they flock to their balconies.

A post shared by Benevento Calcio (@beneventocalcioofficial) on Jun 27, 2020 at 1:08am PDT

“We won’t gather because the virus is still active even if we are far away from it,” he told Il Mattino .

“We would give a very nice sign, truly incredible, if the whole city would decorate their balconies, windows, terraces and welcome the players, the technical staff and managers.Those who live in the alleys and not on the main street can be accommodated on the balcony or the terraces of a neighbour. I hope everything goes well.”