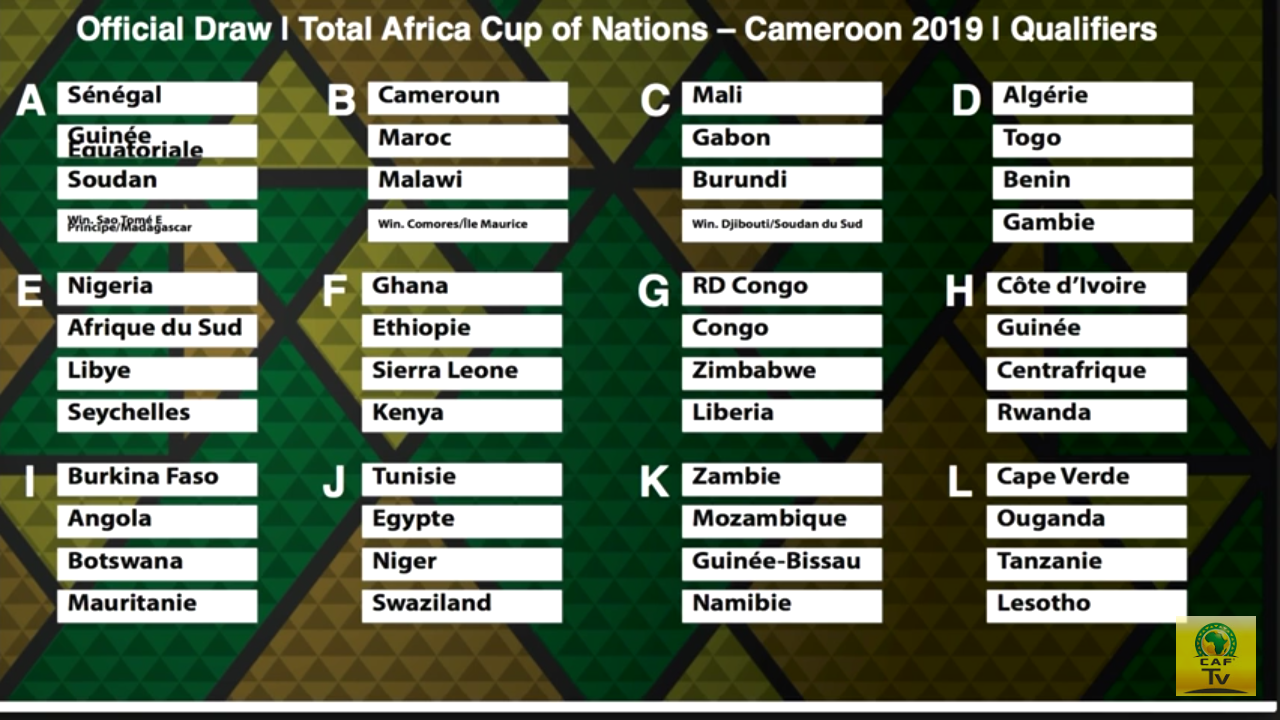 AFCON Final Qualifiers for Egypt 2019 remain nine matches.
The final nine matches will be played this weekend between today(Friday) and Sunday.

Nigeria v Seychelles – Group E, will be in action on Friday at the Stephen Keshi Stadium in Asaba. The Super Eagles have already qualified from the group and will be going for the game to fufill the group fixture.

Also on Friday, there will be focus on Group I, where Angola and Burkina Faso are hoping to join already-qualified Mauritania in progressing.

The advantage lies with the Palancas Negras, who play away to eliminated Botswana and know that a win will secure a ticket to Egypt 2019. The Burkinabe, meanwhile, must beat Mauritania at home in Ouagadougou and hope that the Zebras do them a big favour in the concurrent game in Francistown.

Friday will also see Algeria host Gambia in Blida. The North Africans are safely through, while the Scorpions still have hope of qualifying despite entering the game at the bottom of Group D: if they can defeat the Fennec Foxes and Sunday’s game between Benin and Togo on Sunday ends in a draw, then Gambia will reach the AFCON finals for the first time.

The first of Saturday’s key games comes from Bujumbura, where Burundi and Gabon will battle to join Mali in the AFCON finals. The Swallows need only avoid defeat on home soil against Pierre-Emerick Aubameyang’s Panthers to secure a first ever ticket to the continental finals.

The focus then switches to Yaounde for a Group B match between Cameroon and Comoros, where the Indomitable Lions must avoid defeat to join Morocco in qualifying from the pool, before the intriguing battles in Group K take place in Bissau and Lusaka.

Guinea-Bissau need only a draw at home to Mozambique to qualify for the first time – a win or draw for the Djurtus would also help Namibia reach the finals for the first time since 2008, regardless of their result away to already-eliminated Zambia.

Saturday will also see Egypt (hosts), Ivory Coast, Ghana, Senegal and Mali all in action, though these heavyweights have already secured qualification and their matches are no more than ‘dead rubbers’.

Sunday’s opening matches come from Group G, where all four teams still have hope of qualifying. Zimbabwe look the most likely to succeed, as they top the standings and have a home game against bottom-of-the-log Congo in Harare, while the other clash in Kinshasa sees DR Congo needing to defeat Liberia to book a place in the finals.

Group L will then be decided with matches in Dar es Salaam and Praia, as Tanzania, Cape Verde and Lesotho grapple to join pool winners Uganda in qualifying. The only team of the trio with their fate in their own hands is Likuena, who know that a win away to the Blue Sharks will secure a first AFCON ticket.

The final game of the qualifiers comes from Sfax in Tunisia, where Libya and South Africa will battle for the right to join Nigeria in advancing from Group E. Bafana Bafana need only avoid defeat to qualify, while Libya must win to leapfrog into second place and return to the Nations Cup for the first time since 2012.