By Tunde Liadi On Feb 14, 2019 0
Gombe United striker Adamu Mohammed has stated that he is delighted to get his season started with its first goal  against Nasarawa United few days ago. 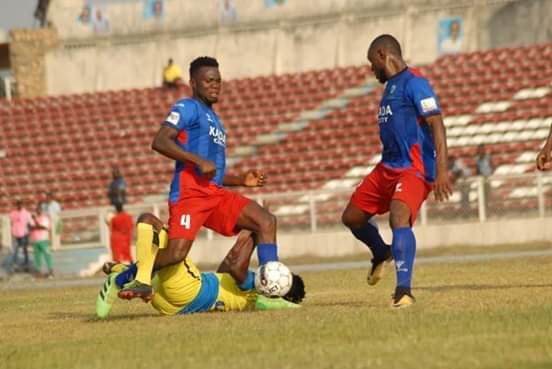 Mohammed scored  a goal and assisted with two others as the Desert Scorpions whipped the Solid Miners 5-2 and the striker noted that he is relieved that he has got his first goal of the season.
“It is always a relief and a delight to score goals but this one is very special because it was my first goal of the season,” Mohammed told SportingLife.
“I am happy that an heavy weight has been taking off my back and I can concentrate on getting more goals because the first goal is always difficult. I want to help my team and I  am with th in Okigwe to ensure that we get a good result at the end of the 90 minutes against Heartland.
” It is a game we have prepared for very well and we won’t be disappointed at the end of the game. We played a lot better against Nasarawa United and we converted most  of the chances that we created. We expect to do the same against Heartland too.”
Gombe United are 10th in Group B of the NPFL with eight points from seven games.
Adamu MohammedGombe United