Euro 2020 Champions Italy boast of five players in the team of the tournament with man of the match Leonardo Bunucci leading the pack.

The triumphant Azzurri have five players in UEFA’s team of the tournament while Gareth Southgate’s men boast three, joined by one each from Belgium, Denmark and Spain

Raheem Sterling, Harry Maguire and Kyle Walker were the Three lions in the team of the tournament.

England enjoyed an unforgettable run to a first ever European Championship final, where they suffered a heart-breaking penalty shoot-out loss to Italy on Sunday. 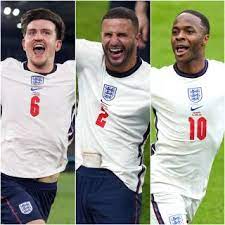 England right-back Walker and centre-back Maguire make up the defence along with Leonardo Bonucci, who was man of the match in the final, and Leonardo Spinazzola, who suffered an Achilles injury in the quarter-final.

The selection was made by UEFA’s technical observer team comprised of 16 former players and coaches, including David Moyes, Packie Bonner and Robbie Keane.