It was double delight at the Cathedral on Wednesday as soccer fans who had trooped out in their numbers to watch Rangers International  take on visiting Yobe stars did not only enjoy the match but also had the benefit of having one of the wave making musicians in their midst.

Popular singer and songwriter Chinedu Izuchukwu Okoli otherwise called Flavour was among the sports loving fans that turned out to watch the match that saw Rangers pocket three points and three goals.

Flavour who probably planned to step in just to enjoy the show was however spotted on the stand with many of his fans hailing the Na Abania exponent. The club did not also fail to thank the musician whose brand of music hip-pop garnished with high life and everything in between has become a must play at most social gatherings especially at weddings where the brides insist on special numbers like’ Ada- Ada’ to mention just that. 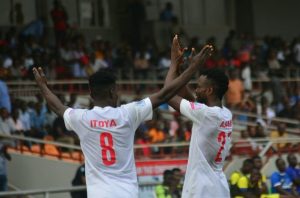