If they money is there flaunt it and let everyone around you benefit from it! That is perhaps the stand of Floyd Mayweather as he reveal buying designer shoes for his dog. 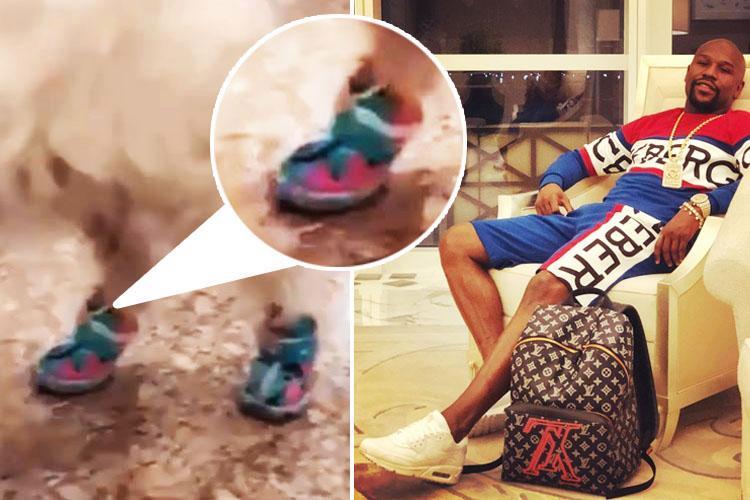 The fighter took to his Instagram while in the Philippines to show off his pooch’s fresh footwear. Talking to the camera,

Mayweather says, “See, I’ve got on Nikes — my dog’s got more expensive shoes than I’ve got.”

The 41-year-old boxer then shows off his adorable white-haired pup, saying, “See my dog — them red bottoms.” In the clip, the dog appears to be wearing pink and teal booties.

Mayweather, known for his penchant for luxury labels, implied that his dog had on shoes by Christian Louboutin — which are often referred to as “red bottoms” because of their red-lacquered soles.

While it may be true that Mayweather’s crisp white Nike Air Maxes are less expensive than his dog’s shoes in the video, the boxing superstar has been known to rock his own luxe footwear, including the $600 Alexander Wang sneakers he donned for “Jimmy Kimmel Live” last summer.

Mayweather, who’s been nicknamed “Money” as well as “Pretty Boy,” also posted a snap of his color-block look complete with a Louis Vuitton backpack and selection of bling on his grid.

Mayweather has been enjoying  expensive annual vacation around the world.Floyd’s always been good to his pets flying them on private jets and making sure they only drink water out of crystal glasses.

U-20 Qualifier: Maikaba sure of victory over Guinea Bissau