Ex-Schalke defender, Hiannick Kamba, said to have died in a car crash in 2016 is reportedly alive in Germany – and his ex-wife is now being probed for insurance fraud. 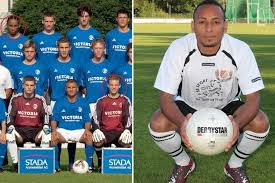 The player ‘died’ in his native Congo before a “six-figure sum” was paid to his wife as part of an insurance settlement.

Other German reports describe him as “obviously not dead”.

Kamba was a talented right-back for Schalke’s youth team and played alongside Bayern Munich and Germany icon Manuel Neuer before his departure in July 2007.

He went on to play for a variety of lower league German sides and was playing for eighth tier outfit VFB Huls when news of his death emerged in January 2016.

It is said Kamba, 29 at the time, left his friends to take a trip to the “interior” of Congo without his papers, phone or money and died in a motor accident soon after.

And when news of the death reached Germany, Kamba’s ex-wife is said to have produced a Congolese death certificate and a funeral announcement in order to secure the ‘six figure’ pay-out.

It is unclear whether the documents obtained in Congo were faked or simply procured through corruption.

But after Kamba was seen alive near his home old home in Gelsenkirchen, having reportedly made his way back to Germany in March 2018, Essen city attorney general Annette Milk is now leading a public prosecution against the unnamed ex-wife.

Milk said: “The accused is accused of fraud. But she denies the charge. The process is still ongoing.”

The 39-year-old woman is also said to have a ten-year-old son.

Kamba reported to the German embassy in the Congolese capital Kinshasa in 2018 to address the “fake news” of his death and inform authorities of the “actual situation”.

There, he recounted the tale of having been separated from his friends with no papers, money or phone.

The wife reportedly only learned of the life insurance policy after the alleged death.

And in a bizarre turn of events, Kamba – who has no charges against him – will be called as a witness in the trial.

Kamba fled the Congo with his parents as a youngster in 1986.

After his family were deported back to the war-torn nation in 2005, Kamba was allowed to stay in Germany thanks to his youth team status at Schalke.

The case caused mass public debate as the move meant Kamba was granted full asylum and residency rights, which he maintains to this day.

Ince: Man Utd must get rid of diabolical Pogba