Miralem Pjanic admitted it would have been strange to see Lionel Messi in another shirt this season as he was finally unveiled as a Barcelona player.

Pjanic, who was part of a swap deal which involved Arthur joining his former side Juventus, was delayed arriving in Spain after testing positive for coronavirus in August.

The midfielder will take Arthur’s No 8 shirt which has also been worn by club legend Andreas Iniesta. The 30-year-old spoke about his pride at signing for the Catalan club and the importance of club captain Messi remaining at the Nou Camp.

New Barcelona signing Miralem Pjanic said he can’t see Messi leaving the club because he ‘grew up’ there.

Messi asked to leave earlier this summer, believing he was a free agent, but the club insisted that his £629million release clause was still active.

The forward opted not take his side to court, meaning he can leave on a free transfer next summer – if he wishes.

But new boy Pjanic insisted he can’t see him wearing another team’s kit after signing a four-year contract with the Catalans.

‘Leo has his home here and I can only imagine him here,’ said the midfielder. 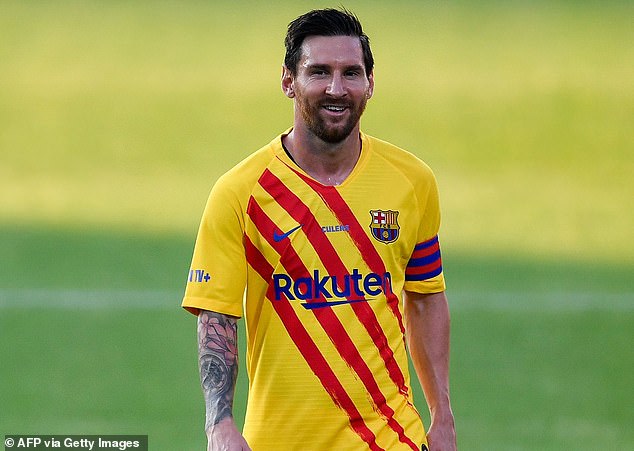 ‘It would have been strange to see him in another shirt. He’s perhaps the best player ever and it’s huge to have him alongside us.’

The Bosnia international went on to share his pride at completing his switch to LaLiga.

‘It is a great pride for me to be here. I hope to stay here in the years to come and win titles with the club.

First time on the pitch 😍 @mir

‘For me, playing is a dream. Being part of this club is something extraordinary. I am very grateful for everything I have done in my career. Today I am in the best team in the world.

‘Last season was unfortunate, and the COVID-19. The break was complicated, but there are things that happen in football and we have to look forward. Barca will be great again. Sharing a dressing room with Messi and with everyone is a great opportunity and a dream.’

No Spurs, Man Utd offers; Real Madrid players want nothing to do with Bale