By Our reporter Last updated Jul 15, 2019 0
NEW YORK - JANUARY 1997: Pernell Whitaker poses with his belt during a portrait session in 1997 in New York. (Photo by: The Ring Magazine via Getty Images)

Former boxing champion Pernell Whitaker has died after being hit by a vehicle in Virginia Beach on Sunday night. 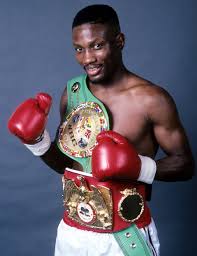 Whitaker, 55, won titles at lightweight, light welterweight, welterweight, and light middleweight and was the undisputed lightweight champion in 1989.
He also was the lineal lightweight and welterweight champion and won the lightweight gold medal in the 1984 Olympics game by beating Luis Ortiz from Cuba.
Whitaker was crossing the road when he was hit by a pickup truck, police said.
He was pronounced dead at the scene and the driver remained there to be interviewed by police, authorities said.
Whitaker fought as a professional boxer from 1984 to 2001 and was inducted into the International Boxing Hall of Fame in 2007

He fought as a professional 46 times, winning 40 of those bouts – 17 by knockout.