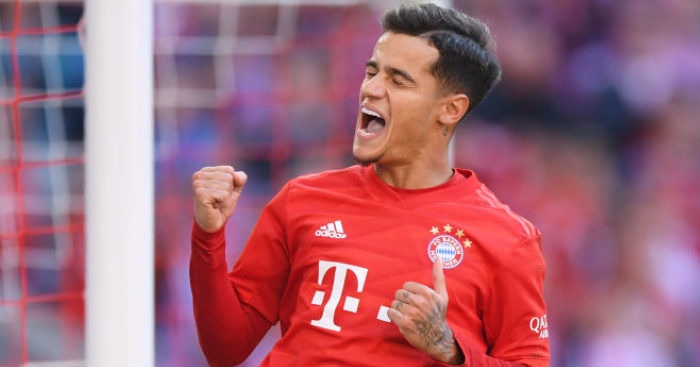 Chelsea, Manchester United, Arsenal and Tottenham are all said to have enquired about the Brazilian playmaker’s availability at the end of this season.

The 27-year-old admits that he should never have quit Anfield in January 2018, when he joined Barcelona in a ‘dream’ £142million move.

Coutinho has largely endured a nightmare in Catalonia, with his failure to make a significant impact seeing the Barca fans turn on him and often booing and jeering his underwhelming displays.

Last summer he joined Bayern Munich on loan, but the German giants have now indicated that they are not prepared to make it a permanent deal.

Bayern paid a £7m loan fee and also agreed to pay Coutinho’s £240,000-a-week wages, but they will not commit to the asking price of £100m asking price for a permanent deal.

And the report in the Sunday Mirror claims that all four English teams have the same view, with them all wanting the talented attacking midfielder on loan.

Although Liverpool chief Jurgen Klopp reluctantly allowed Coutinho to leave, the report adds that he is not interested in bringing him back to Merseyside.

Ndidi gives kudos to healthcare workers, recognises them as his ‘real heroes’