It is the game which could easily have been the final of the Women’s World Cup — the defending champions and favorites, the U.S., against hosts France, seeking their first title. 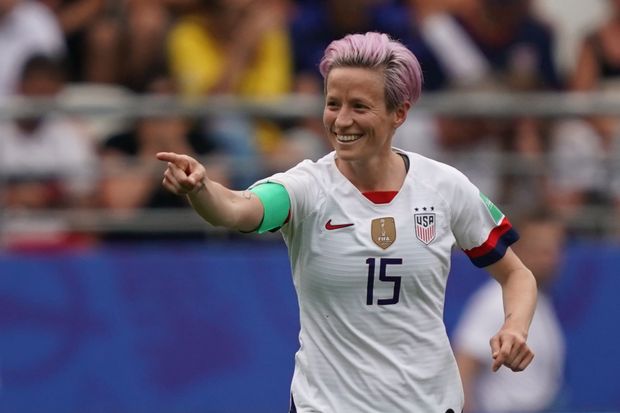 While England takes on Norway in Le Havre later on Thursday and Saturday sees Italy face the Netherlands and Germany up against Sweden, it will be the winner of the encounter at the Parc des Princes who will become the tournament’s team to beat.

This World Cup has broken all manner of records for television audiences globally, and Friday’s match should continue the trend, with the intervention of U.S. President Donald Trump merely adding to the interest.

On Wednesday, Trump took aim at American captain Megan Rapinoe, who had said that she would not attend any title celebrations for the team at the White House.

While Trump’s criticism of Rapinoe led to statements of solidarity from some of her teammates — it will surely not be lost on the French that their opponents are discussing their celebration plans just hours before a World Cup quarter-finals.

If France coach Corinne Diacre needs some additional material to fire her players up, then the recent suggestion from American defender Ali Krieger that the U.S.’s reserves could beat any of the teams at the World Cup would surely feature.

The hosts, however, have yet to truly shine, needing extra time to grind their way past Brazil with a 2-1 win in the previous round.

“Obviously, I know my players inside out. I know that we weren’t 100 percent (against Brazil) and the objective is to hit that 100 percent for the next game,” Diacre said.

Diacre will look to her core of players from European champions Olympique Lyonnais.

If center back Wendie Renard, midfielder Amandine Henry, left wing back Amel Majri and striker Eugenie Le Sommer are all on top form, the Americans will have plenty of work to do.

Yet for all their entire swagger, the U.S. hardly looked like world-beaters themselves as they laboured to a 2-1 win over Spain, needing two penalties, with the second a highly questionable decision, to make it to the last eight.

There has been much talk of grit and determination from the only non-European team left in the competition, but those qualities alone will not be enough to ensure progress against a French side, capable of clever possession football.

“To me it’s going to be an amazing game, probably crazy and a lot of intensity, as it should be because I truly think this is the world game for women,” said coach Jill Ellis.

Yet the heat-wave that is hitting Paris will mean Friday’s match will likely be played in energy-draining, humid conditions and while the fitness of the American team is as impressive as their self-belief, a slower game could help the hosts.

Alex Morgan is the tournament’s top scorer so far with five goals, but the three-time champions U.S. possess a real threat from the bench with Christen Press and Carli Lloyd, players who can make an impact late in games.

Rapinoe’s work-rate and experience in midfield is central to the Americans’ approach and before her spat with Trump exploded, she captured the essence of what this quarter-final is all about.

“I think this is the game that everyone had circled,” she said. “It’s going to be a great match…these are the games you dream about as a kid.” (Reuters/NAN)