The newly elected chairman of the Delta Football Association, Edema Fuludu, has stated that the June 13, 2019 elections in Warri, Delta State, was a very credible one.

He added that it was conducted with strict adherence to the NFF Statutes.

The ex-international who spoke in Warri, Friday morning, noted that all due process was followed in the elections process at the Victory View Hotel, Warri.

“Everything we did was with the approval of the Nigeria Football Federation.” Stressing that: “The date, time, venue, Electoral Committee and delegates for the elections were all approved by the NFF. “We had a list of 32 delegates out of which 25 voted with 7 delegates believed to be supporters of the Delta Sports Commission chairman, Tonobuk Okowa, staying away without excuses. It was their choice to stay away after I refused to accept Tonobuk’s proposal to step down and run for vice chairman. 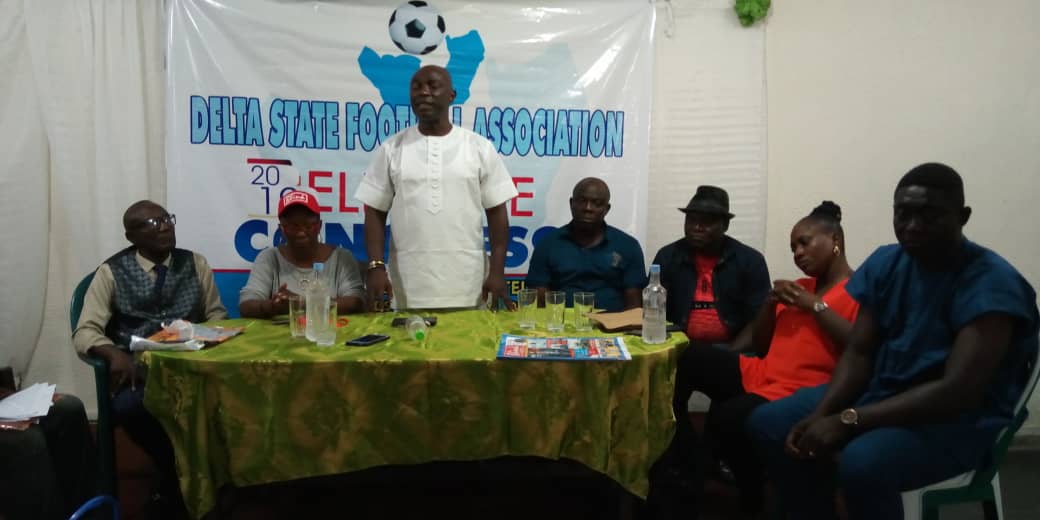 “Everything the Delta Sports Commission have been doing is government interference.

The Commission chairman has been directing the Delta FA secretary, Azuka Ogosi, to write all sorts of letters against the DFA preparations for elections. And the secretary wrote letters and notifications without consulting with me the Acting chairman nor with members. This is unacceptable.”

“Another time, Ogosi, came up with three different dates for elections without the input of DFA members. These were also rejected by the NFF. Even the letter written by the secretary of the DFA after our elections yesterday, calling the DFA delegates group of friends was not authorized by members of the DFA. You can imagine the DFA having elections in Warri and the Secretary was in Asaba writing letter as directed by the Sports Commission chairman. It’s the height of government interference which the NFF Statutes object
to.”

The former Acting chairman of the DFA disclosed that when a big wig of the NFF suggested that the DFA elections should be moved until after the 2019 Nations Cup, despite being a personal opinion, it ran against the directive of the NFF Emergency Congress that all states’ FA elections must hold between May 28 and June 30, 2019. “We all know that the Nations Cup will end in July.”

The Delta FA Congress took place on Thursday in Warri and it was followed by the elections.

Shortly before the Elections, the Congress endorsed the removal of the Delta FA Secretary, Azuka Ogosi, for gross insurbodination, anti-association activities, and sabotage. To replace Ogosi, the Congress of the DFA with a unanimous vote approved the appointment of Stanley Orukpe as the new secretary of the DFA.

The newly elected board of the Delta Football Association was inaugurated Thursday afternoon at the Victory View Hotel in Warri.

My dream is to play in Champions League –Balogun