BT Sport has seen off the challenge of Sky Sports in order to win the rights to the upcoming boxing rematch between Tyson Fury and Deontay Wilder. 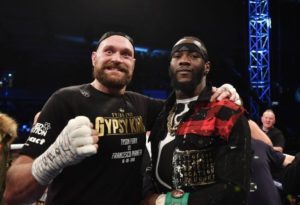 According to the Daily Mail, the Comcast-owned Sky tabled a bid of £10 million in an attempt to secure exclusive rights to the fight in the UK for Sky Box Office. The paper reports that Queensberry Promotions (Fury’s team) decided to stay with BT due to the wider availability of BT Sport’s Box Office, which is available to both BT customers and non-subscribers through the BT Sport Box Office App.

The pair’s December 2019 fight drew in 420,000 buys, some way short of the record 1.6 million who were pulled in by Anthony Joshua’s rematch with Andy Ruiz Jr.

BT has also played host to every Fury fight since the 31-year-old’s 2018 comeback.

While it may only appear tangentially relevant, it’s also worth considering that Fury’s camp may consider the fighter’s ongoing relationship with the WWE, with which BT signed started a high-profile deal earlier this month, as central to remaining with the broadcaster.

Fury featured in several episodes of WWE’s Monday Night Raw in 2019, culminating in a high-profile match during one of its controversial PPV events in Saudi Arabia.

It has been widely speculated that Fury will make a return to the wrestling promotion in the coming months with a view towards a match at Wrestlemania – the WWE’s equivalent of the Superbowl. The outspoken boxer even told reporters that “after I beat Deontay Wilder, I’m gonna take down Brock Lesnar at WrestleMania.”