Africa Women Cup of Nations defending champions Super Falcons began their campaign in Ghana Sunday on a losing note. The 10-time winners who are chasing their 11th title on one hand and seeking a ticket to the 2019 FIFA Women’s World cup in France on the other, surprisingly lost their opening match against Bayana Bayana, thus making a mockery of pre-match permutations  that it would  be a walk in the park for the Thomas Dernneby tutored side.

In a competition like this, losing the opening match is always a set back and not many teams are able to bounce back after the initial set back.  In the case of the Super Falcons, they will next face Shepolopolo of Zambia, a very compact team that sent Equatorial Guinea to the cleaners in their opening match thanks to a 5-0 whitewash. In fact ahead of that encounter on Wednesday the Zambians have expressed confidence that they will re-enact the feat achieved in the opener

Speaking after the game at the press conference man of the match winner Kundanaji said, “Gone are the days we were scared of Nigeria. This is not the old Zambia. We are wounded buffaloes.” The match against Zambia will not be cheap. The Zambian girls are fast and have impressive finishing. If Falcons are to overcome Shepolopolo they cannot afford to be as wasteful as they were against South Africa, and losing two matches out three will not be funny. 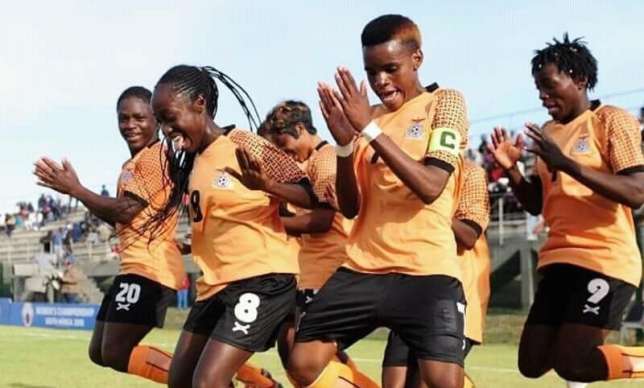 Coach Thomas Dernneby has reportedly blamed the defeat on poor preparation devoid of quality friendly matches.  Some have indeed agreed with him on this. The team before departure for the championship were camped in Epe and only managed to play SiaSia Boys academy losing 3-1 in Abuja and then played Dominion Hotspur at the Atlantic Hall pitch, Epe losing 3-2. While camping in Abidjan the side played Asec Mimosa Under 16 boys, again losing 3-1. And just before team got into the mood of the championship, they had lost 8-0 in a friendly match against France in what was Dernneby’s first real test as Super Falcons coach.

Prior to their departure for the competition it was reported that the coach was being owed eight months salaries besides unpaid bonuses and allowances like the players.

Infact some of the players in this tournament are yet to be paid their entitlements since 2016. This scenario no doubt is bound to have impact. Will the Falcons fly or crumble against Shepolopolo?

One Edition One coach!

It is of interest that Nigeria has never been to this championship back to back with the same coach since 2000. Call this lack of continuity and you may be right.  Here is a list of the coaches at the helm from 2000 till date.

Afelokhai, Akpeyi to get game time against Uganda