Olivier Giroud scored the only goal of the game after he gave the Blues the lead on the stroke of half-time, heading in from close range on Tuesday night.

As expected it was all Chelsea in terms of possession but Frank Lampard’s side lacked urgency and energy.

Giroud had a handful of chances in the first-half which he should have done better with. The first in the 21st minute when he was played in behind by Jorginho but he could only shin it into the hands of Tim Krul.

The next chance came when Cesar Azpilicueta cut it back from the byline for the Frenchman however he scuffed the glorious chance wide. 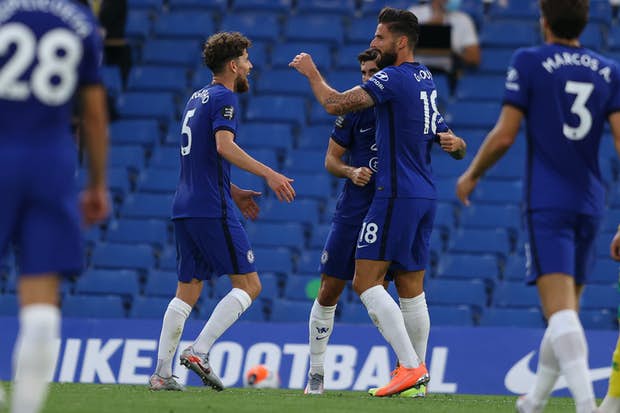 Christian Pulisic went closest though in the 36th minute when he quickly turned and fired first time in the box on his left-foot but Tim Krul tipped his effort onto the crossbar. Kurt Zouma headed the resulting corner wide despite it being a free header.

However Lampard’s side finally took the lead in stoppage time and Giroud finally finished a chance. Christian Pulisic whipped it in from the right-hand side, continuing his fine form, and Giroud headed in from close range.

Antonio Rudiger, who came back into the side, had a chance early in the second-half but he headed well over.

chelsea-fc-v-norwich-city-premier-league (14)
Lampard made his first change of the night in the 67th minute bringing Ross Barkley on for Ruben Loftus-Cheek as the Blues searched for their second.

Pulisic was denied in the 75th minute by Krul after he linked up with Giroud, but the American’s low effort was parried away to safety. 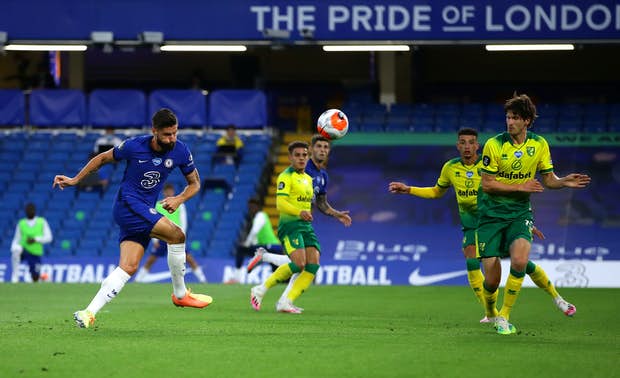 Callum Hudson-Odoi, Reece James and Tammy Abraham were all given by Lampard in the late stages as they looked to see out the game, and so they did.

Chelsea bounced back at the first attempt and now go four points clear in third. Champions League qualification is one step closer for the Blues.