Barcelona are set to agree a new long-term contract with goalkeeper Marc-Andre Ter Stegen after months of deadlock.

Back with the group

The details are outlined on the front page of Friday’s edition of Diario Sport, which says that an agreement is set to be reached in June on a contract through to the summer of 2025.

The German goalkeeper’s current deal at the Camp Nou runs through until the summer of 2022, after he penned a freshly extended contract in 2017.

With a buyout clause of €180m, there is no great concern at the Camp Nou about the situation but they have had to push back their forecasts of an agreement.

In December, Diario Sport said a new deal would see the player’s contract run through until 2025 – surpassing even those deals handed to Frenkie de Jong and Antoine Griezmann while ESPN have said it is a priority for club president Josep Maria Bartomeu.

The 27-year-old has demonstrated he is one of football’s elite goalkeepers with a series of world-class performances for the Blaugrana, whom he joined from Borussia Mochengladbach in 2014 for €12m. 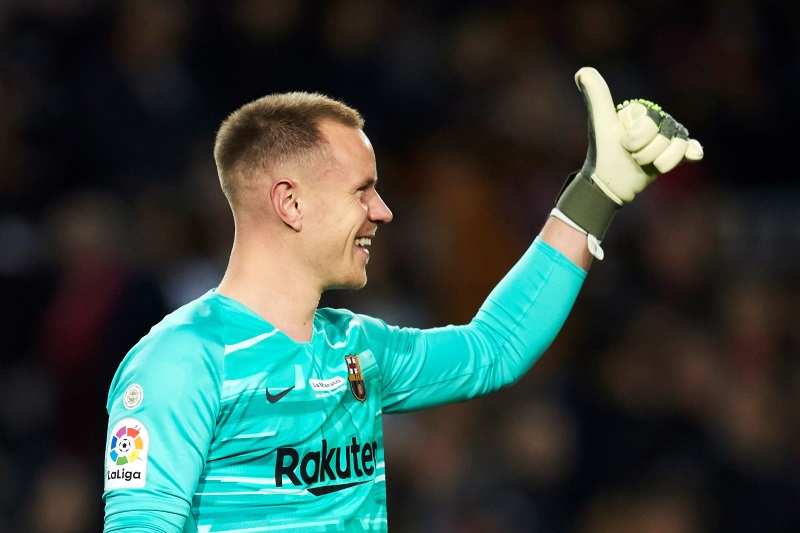 Ter Stegen has been described as a tall, agile and consistent goalkeeper, with quick reflexes, good decision-making and excellent shot-stopping abilities; he is also strong in the air, good in one-on-one situations, and effective at communicating with his back-line courtesy of his strong personality.

He initially was number two to Claudio Bravo at the club before establishing himself as first-choice, and is currently above summer arrival Neto in the pecking order.

Inter to sign PSG star as replacement for Barca-bound Martinez