Pep Guardiola wants his questions answered after Manchester City lost to Liverpool 3-1, a victory the Spaniard feels was aided by VAR. 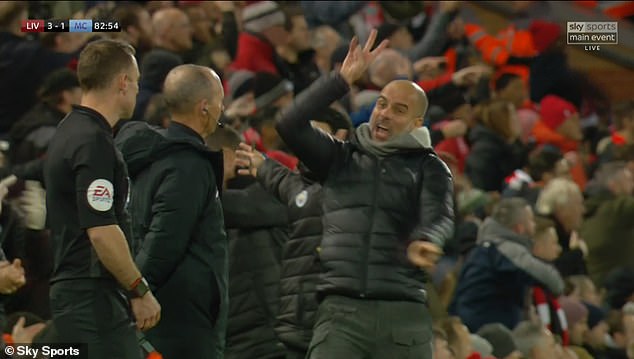 City appealed for a penalty following a hand ball by Trent Alexander-Arnold which was overruled by VAR.

‘Which decisions? Oh. Mike Riley and his people – you have to ask them. It would not be nice after we lose to (complain). Ask Mike Riley and the big bosses about it.

‘I said thank you every much. I said the same in the Tottenham game at home (when City were denied a last minute winner by VAR). Thank you so much. Most of the time when I go to the referees and my colleagues, I say thank you so much and good luck,’ he said at the post match conference.

They were behind 22 seconds later thanks to a wonderful Fabinho goal but VAR still checked to see whether they had legitimate claims. When no penalty was awarded, Guardiola and his coaching staff were furious and their anger continued in the second half.

Mourinho says only one issue can stop Liverpool from winning title

Angry Ronaldo storms tunnel after latest substitution in one week