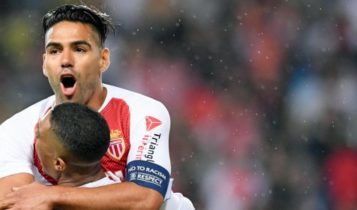 Thierry Henry has finally claimed his first victory as Monaco boss, thanks to Radamel Falcao’s second half free-kick at fellow Ligue 1 strugglers Caen.

The 2017 champions had not won since 11 August and had drawn two and lost four since Henry took over six weeks ago.

While the win did not lift the principality side out of the relegation zone, it did relieve some pressure on the Arsenal and France legend.

Monaco stay 19th but move to within two points of Caen and safety.

Henry, who had been Belgium’s assistant manager, replaced the sacked Leonardo Jardim in mid-October with the club third from bottom.

But since his arrival, they have been knocked out of the Champions League and been short of confidence, good fortune and results.

However, Colombia forward Falcao registered his fifth goal of the campaign with a superb 20-yard free-kick to suggest he may be returning to form after a goal drought of nearly two months.

And Henry’s side got the benefit of a VAR decision in added on time, when Caen winger Malik Tchokounte’s effort was disallowed for an offside against Paul Baysse. That ensured a first clean sheet for Monaco since August, as well as a first win since the opening weekend.