Kaka’s agent has revealed the Brazilian ‘absolutely rejected’ a sensational 100m euro (£88m) move to Manchester City in 2009 – and claimed a major reason for joining AC Milan was his star sign. 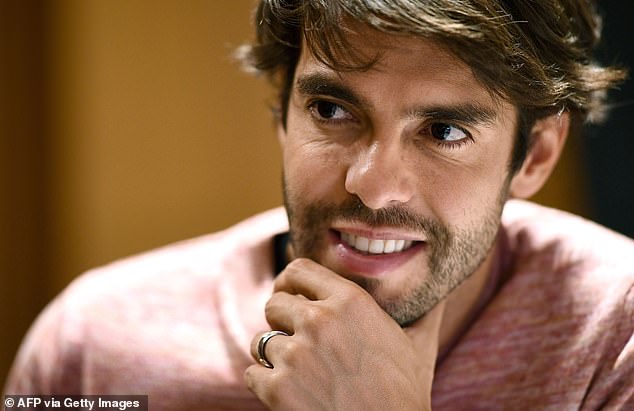 In an extraordinary interview with Milannews in Italy, Gaetano Paolillo also added that the Milan legend could have ended up at fierce rivals Inter.

Kaka played for Milan for six years, joining from Sao Paulo in 2003 and winning the Champions League and Serie A. But at first, it was hard for Paolillo to bring chief executive Adriano Galliani to the negotiating table as Milan had Rivaldo and Rui Costa in their ranks.

‘I even offered him to Inter at one point, but Hector Cuper didn’t know what to do with Kaka in a 4-4-2 formation,’ Paolillo said. ‘Nobody else was really interested, which I found incredible.

‘In the end, (Milan lawyer Leonardo) Cantamessa even did Kaka’s astrological chart and said we had to sign him, because the stars were shining on this player. After sporting director Ariedo Braida was won over, we got Galliani on board.’

After six sensational years at the San Siro, Milan had to accept a potential departure for their star man to balance the books off of the pitch.

Manchester City, looking to recruit a landmark signing to signal their ambition to become a major European heavyweight, but Kaka was not interested in a move to the Premier League.

‘If it was up to Milan, they would’ve accepted the €100m (£88m) offer from Manchester City, but Kaka absolutely refused to move,’ continued Paolillo.

‘Every year, Real Madrid would ask if Kaka was available, but Milan had always considered him off the market and he wanted to stay too. That was the plan, anyway.

‘After his last game with Milan in Florence in 2009, he left for international duty and only took a rucksack. He said we’d meet back at the Malpensa Airport in a month, but Milan sold Ricky (Kaka’s nickname) to Real Madrid when he was in Brazil.

‘He never wanted to leave, and the money he earned at Real Madrid wasn’t the issue. He was loved by the fans and more than happy at Milan, but the club put him on the market and at that point Real Madrid was a good option. It wasn’t Galliani’s call either, he loved Ricky.’

Coronavirus: Adebayor not ready to donate anything