How Thomas Partey met his clone in Ghana

By Julius Okorie with Agency Report On Mar 28, 2022 0
Thomas Partey and his unnamed lookalike in Ghana

Fans were tickled when Arsenal ace and Ghana international Thomas Partey met his lookalike just before the first leg world cup play off against Nigeria at the Baba Yara Stadium.

Footage showed the player next to someone who struck a huge resemblance to the 28-year-old, with his team-mate Kofi Kyereh posting the video on his Instagram story.

The clip shows Partey decked out in Ghana training gear with his arms around his lookalike, who is wearing the Arsenal warm-up top.

Supporters on social media chimed in with just how similar the pair looked. One said: “When you’re popular you’ll surely find your look alike.

Another wrote: “Nah this guy looks more like Thomas than Thomas. 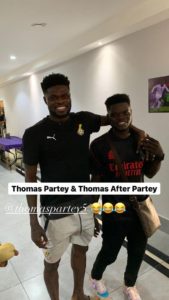 Another asked: “How is it even possible?”

One quipped: “If this guy goes to Arsenal camp I swear they will think he is partey and start him in a match.”

Partey, who claimed the club’s player of the month gong for February, has been enjoying a fabulous period for the north London side this year. He played exceptionally well against Leicester earlier this month, a match in which he scored the opening goal before hitting the woodwork.

Partey who was impressive in Black Stars first leg World cup play-off tie against Super Eagles last Friday despite the goalless draw, will be dreaming of a table turning out in Tuesday return leg, dream which some say could be dead on arrival as Super Eagles  have vowed to put in 100% effort at the MKO Abiola Stadium.

Should the Eagles clinch the ticket for the World Cup billed for November this year, it will be the 7th time Nigeria will be making appearance at the Mundial with the best performance, round of 16 ouster recorded in 1994 in USA 1998 in France and 2014 in Brazil.

Ghana on the other are seeking to make a fourth world cup appearances, their best outing being Quarterfinal finish at the first ever Africa hosted World Cup in 2010 in South Africa, where they lost 4-2 on penalty to Uruguay after 1-1 draw.