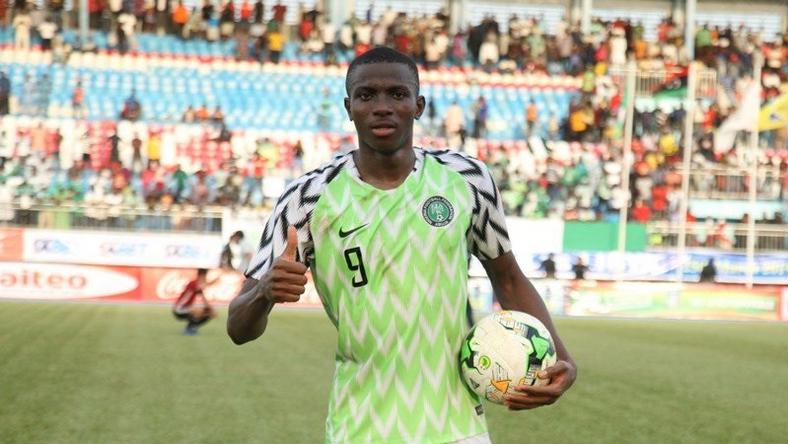 Victor Osinmeh has linked his current top flight form in the round leather game to an uncommon stance which he traced to criticisms from football enthusiasts in and out Nigeria.

The Nigerian international who spoke live on television over the weekend was apparently a bold and proud player glad to have found his scoring boot on the recent national assignment for his father land.

“I must say that i found my scoring boots from God and critics. i have always been down even at my club anytime i am not hitting the net. And the criticisms keep coming and i have to put up a strong challenge for myself to work hard on those areas mentioned by the critics to arrive have arrived at the best of me today.”

“And playing with the under 23 team and the invitation by senior national team was an opportunity that i cherish and hold so dearly,” he said.

Recall Osimhen who plays on loan for Belgian club Charleroi was an hat-trick hero in the AFCON U-23 qualifier against Libya just as Paul Onuachu who plays for FC Midtjylland in the Danish league grabbed the headlines in the international friendly with Egypt.

Therefore, by their exhilarating performances of the youngsters are highly favoured to be among the strikers that Rohr would put into consideration for the 2019 AFCON in Egypt.

The technical adviser of the team, Gernot Rohr also gave the two players the much needed lift when he said in a post match conference that they had completely justified their invitations and provided cure for headache over goal getters in the team.

So satisfied was the Franco-German tactician that he said his attacking options had increased as he could rely on the two burly strikers to fill the shoes of the other more formidable forward men in the team.

Aguero among the best in the world-Messi