There are indications that Eagles international, Jude Ighalo is ready to spend an un-estimated amount of his hard earned money on girls in Nigeria.

The Nigerian international who is married to beautiful Sonia Ighalo is not about to pump the money into parties for the girls but rather into something more beneficial. 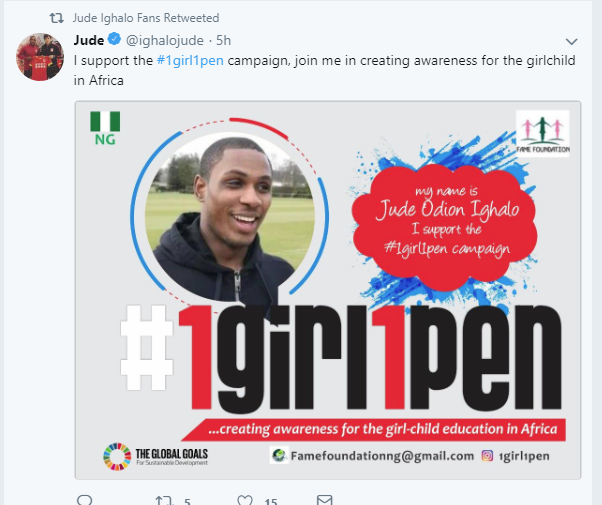 On Monday Sportinglife.ng gathered that the professional footballer who plays as a striker for Chinese club Changchun Yatai is now the face on social media for #1girl1Pen- an international campaign for the girl-child education.

The 28-year old Nigerian international who is one of the faces of the humanitarian campaign maybe moved to fund scholarships for the less privilege girl-child in Nigeria among other initiated support programs.

On @ighalojude-Twitter post, the footballer wrote; “I support the #1girl1pen campaign, join me in creating awareness for the girl-child in Africa”.

The cheerful face of the married footballer was bold on #1Girl1Pen graphic as he called on well-meaning Nigerians and beyond to join him in the humanitarian campaign.

With this public identity with the girl-child awareness, the Eagles star may soon add another international humanitarian and philanthropist’s feather to his cap, as he recently opened an orphanage in Lagos.

Sportinglife.ng can also report that he had approached the Edo State Government to provide him with a portion of land in order to fulfill his promise for the state.

#1girl1Pen – a global foundation aim at creating awareness for the girl-child education in Africa is initiated by FAME Foundation Africa.

RUSSIA 2018 WORLD CUP: Rohr is talking too much- NFF