By Akeem Lawal On Jun 24, 2019 1
Super Eagles striker, Odion Ighalo’s superb goal in Nigeria’s 1-0 victory over the Swallows of Burundi has been selected as the best among the seven goals scored in the matchday 2 of the 2019 Africa Cup of Nations in Egypt by the Confederation of Africa Football (CAF), Sportinglife.ng reports. 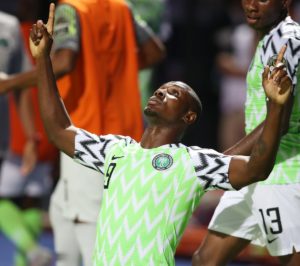 While making the announcement of its official Twitter handle, the continent’s football ruling body said, “7 goals to choose from, but only one got our goal of the day accolade – @ighalojude of @NGSuperEagles,” CAF said via @CAF_Online.
The matchday fixtures also saw Uganda defeat DR Congo 2-0, while Guinea and Madagascar played out a 2-2 draw in the other Group B game but none of the  goal came close to the wonderful strike by the Nigerian striker.

The Shanghai Shenhua forward had been on the pitch only four minutes in Egyptian Mediterranean city Alexandria when he struck the 77th-minute winner.

Ighalo who started the game on the substitute bench came on for Paul Onuachu in the 73rd-minute before latching on to a superb back-heel pass from Ola Aina to slot home the match winner.
AFCON 2019Odion Ighalo

We were lucky against Burundi, Akpeyi admits