Kelechi Iheanacho has taken to social media to congratulate Jamie Vardy after he netted his 100th and 101st Premier League goals in the 3-0 win over Crystal Palace at the King Power Stadium on Saturday. 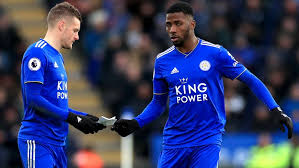 Vardy has been phenomenal for the Foxes since they made it to the top-flight in 2014-15, with his 24 goals landing the East Midlands club a shock league title the season after, when they finished 10 points clear of Arsenal.

Back to winning ways. Congrats to @vardy7 on reaching the 100 club pic.twitter.com/8LzgtOAoO8

He has reached the 20-goal mark on two occasions including the current campaign, in which his 21 goals have him on top of the goalscorers charts, two ahead of Arsenal and Gabon forward Pierre-Emerick Aubameyang.

“Back to winning ways. Congrats to @vardy7 on reaching the 100 club,” Iheanacho posted on Twitter.

Vardy became the first Leicester player to score a century of goals in the Premier League era and the fourth in the club’s history after Arthur Chandler (204), Ernie Hine (149) and Arthur Lochhead (105).

The 33-year-old has now scored 128 goals for Leicester since joining from Fleetwood Town in 2011, and a total of 190 career club goals in 388 outings.

Iheanacho was the other goalscorer on Saturday afternoon in what was his ninth league start and 16th appearance, getting the opener four minutes after the break following a dull first-half.

It was the Nigerian international’s fifth league goal of the season and 10th overall.

It is also the first time he scored in back-to-back league games this term having scored in last Wednesday’s 2-1 defeat at Everton, and the second overall after doing so in the two-legged EFL Cup semi-final defeat to Aston Villa.

It marks Leicester’s first win since the resumption of the Premier League after drawing with Watford, Brighton and Hove Albion before losing to Everton.

The Foxes remain in third place as a result of the victory, but will need to be watchful of Chelsea and Manchester United who are just one and three points behind, respectively, on the table, which is making for an intense race to finish in the lucrative Champions League places.

They travel to the British capital on Tuesday to confront Arsenal – who saw off Wolverhampton Wanderers 2-0 on Saturday with Super Eagles hopeful Bukayo Saka scoring his first-ever Premier League goal.