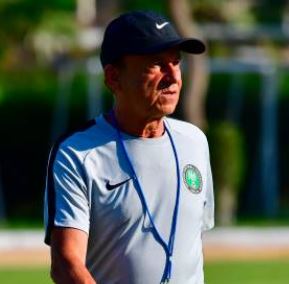 Rohr’s contract with the Eagles runs out in June and from this month he is free to discuss with other teams.

However, Ikpeba said the Nigeria Football Federation (NFF) will do well to give the Franco-German coach a new deal based on what he has so far achieved with the team.

“We’re still not the best team in Africa, but we have made some progress under Rohr, who has pushed his youthful team to play at the World Cup and finish third at the AFCON,” he argued.

“We now need to give him a long-term deal so that he can continue the good work he has started.”

Rohr first took charge of Nigeria in 2016, before the contract was extended till 2020.

This year, Nigeria will continue the quest to qualify for the 2021 AFCON in Cameroon as well as kick-start their campaign for the 2022 World Cup in Qatar.

Headache for EPL coaches as AFCON returns to January