After putting pen to paper for a world title fight against Anthony Joshua, American Jarrell Miller believes the Nigeria-born British pugilist would kiss the canvass when they clash in June. 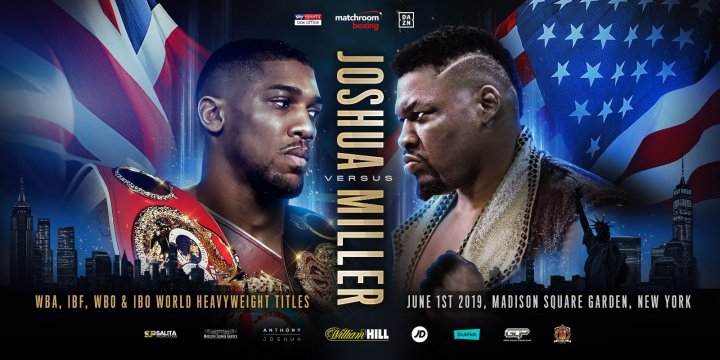 Boasting ahead of the encounter Miller told Boxingtalk.com: “We’d been talking about it for a while, but I’m a big believer in pen and paper. What can I say? It’s a long time coming and I’m ready to knock his ass out. I’m not the kind of person to get overly excited about anything, I just go in there and do work and after I knock him out I’ll break a big smile. Maybe that’s when I’ll get excited.”

“Everything. Everything. Everything will shock Joshua. Even when I fought Johan Duhaupas I put enough weight on him, but I didn’t put enough. I’ve been improving every fight and I’ve been changing certain things up. When I fought Adamek I wanted to just pick my shots, when I fought Bogdan I took my time with it because I knew the shot would come. For this fight I’m going to be on him the whole entire time and I’m talking like he just took my girlfriend and my plate of food. He’s got no idea.”

With the prospect of walking home with four belts [WBA, INF, WBO, IBO] on June 1, Miller said: “Man I’m not going back to the hood with no L’s. I’m going to win, period. They’re extra cocky, a lot of the British fans, but I know some real gritty Brits who come from the slum and know what I’m talking about. A lot of these posh mofos, they don’t know man. He has no idea man, that’s all I could tell you.”

On a possible rematch, he said: “I had to give him a rematch, but once I knock him out the first time it’s going to be even easier the second time.”

Miller is a former kickboxer who competes in the Heavyweight division. He first came to prominence in 2007 when he competed for the New Jersey Tigers in the World Combat League and made it to the finals of the New York Golden Gloves tournament that same year.

Miller is currently ranked the world’s fifth best active heavyweight by Boxrec, and ninth by The Ringmagazine.

Read Also: Miller to Joshua: I’ll take your mum out after knocking you out

From 24 fights, Miller won 20 on knockouts while one ended in draw and he is yet to lose as a boxer.

I’m not worried about sack–Sarri