Watford Manager Javi Garcia says Isaac Success’ reaction to a ball boy holding on to the ball during their 2-1 Premier League defeat against Tottenham was ‘not good’. 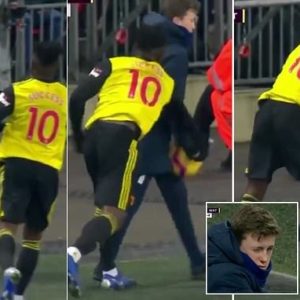 The Hornets were trailing 2-1 to Spurs at Wembley in injury-time when the incident took place between Success and a ball boy.
Success knocked the ball out of the ball boy’s hand as he looked to waste time for the home side. The ball boy was then seen winking to the fans.
The Nigerian was then shown a yellow card by referee Graham Scott and Gracia has now warned him about his behaviour going forward too after watching the incident back on Thursday morning.
‘I think I have my opinion about Isaac’s behaviour and I don’t like to see that. I don’t like to see that from my player with a boy,’ he said.
‘I think we have to look after the boys always and it is not a good reaction is what I can say.
‘I am not here to educate the ball boys on what they have to do or what they don’t have to do. It is not my job. What I can say is we need to improve our behaviour next time.’

Training with Arsenal convinced me I can continue playing…