Nigeria international Isaac Success was an unused substitute as Watford edged crystal Palace 2-1 on Saturday to zoom into the semifinals of the English FA cup.

French man Etienne Capoue shot Watford into the lead in the 27th minute at the Vicarage Stadium in front of 18,104 spectators. Michy Batshuayi however leveled up for Crystal Palace in the 62nd minute.

Both teams afterwards continued the battle of supremacy with goals at par until Andre Gray restored Watford lead in the 79tth minute.

The strike turned out to be the last goal of the match as Watford held tenaciously to the advantage till the final whistle even as Crystal Palace maintained more possession which failed to turn the table. 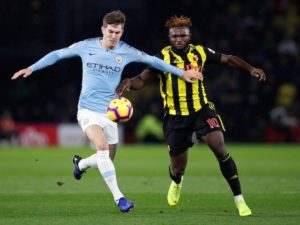 Gray’s latest heroics moved Watford closer to finally returning to the FA Cup final 35 years after they lost to Everton in their only other appearance Palace had laboured without Ivory Coast forward Wilfried Zaha, absent due to a calf strain.

Isaac Success, who saw full 90 minutes action in Watford’s 3-1 defeat to Manchester City in a premier league tie just before Saturday’s FA Cup tie, will be hoping to play a part in the semifinals as they await their opponents of the next stage. In continuation of the FA cup Millwall will take on Brighton & Hove Albion on Sunday at the The Den